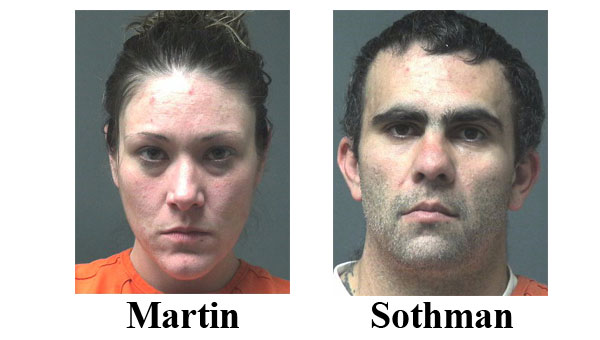 Two parents of an Atmore child were arrested recently, after deputies discovered both parents were smoking marijuana around the child.

An Atmore child was removed from custody not once but twice after deputies allegedly located the child inside two different drug houses Friday.

Escambia County Sheriff’s Deputy Mike Sanderson said just before 10 a.m. Friday he was attempting to serve a warrant on Stacey Martin, 32, at the Martinville Loop Lot E home when he first came into contact with the child.

“I knocked on the door, and Dennis Sothman — the child’s father — answered the door,” Sanderson said. “That’s when I was greeted with a cloud and smell I believed to be burning marijuana.”

Sanderson said he saw the child inside the home and asked Sothman about the suspected drug use in the child’s presence.

“And he confessed to smoking the marijuana,” Sanderson said.

Southman was then arrested and transported to the Escambia County Detention Center.

Sanderson said the Department of Human Resources was contacted and advised that the custody of the child be turned over to another family member.

Sanderson said it was around 3 p.m. when he received new information that Martin was possibly at a home on Short Street. When he knocked on the door, he said he was greeted by not only Martin — the child’s mother — but also another cloud of marijuana smoke, and the child.

“It was the same set of circumstances,” Sanderson said of Martin’s arrest. “She confessed to smoking the
marijuana in front of the child.”

Inside the home, deputies found a lit marijuana cigarette and an assortment of drug paraphernalia.
Sanderson said DHR workers responded to the scene and placed the child in protective custody.

Sothman and Martin are charged with possession of marijuana II, possession of drug paraphernalia and chemical endangerment of a child.

A convicted felon, Sothman could face additional charges stemming from the ammunition found in the home.
Martin was also charged with hindering prosecution II, in a separate case.

Both are currently being held in the Escambia County Detention Center on an unknown bond.

There are several important events planned in the coming days. On Friday, from 10 a.m. until 4 p.m., the main... read more