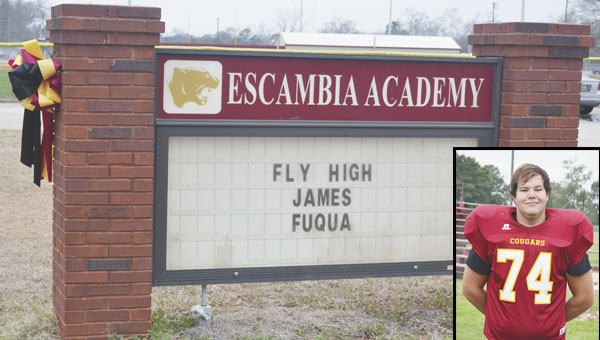 Fuqua was a senior at Escambia Academy, and was a member of the football and weightlifting teams.

An Escambia Academy senior was killed late Saturday night in a car crash in Molino, Fla., and the Atmore man who was driving the vehicle was also seriously hurt.

According to a report from the Florida Highway Patrol, 27-year-old Darrell Antonio Hixon of Atmore sustained serious injuries when the 2004 Dodge Ram pick-up truck he was driving lost control and hit a tree on U.S. Highway 29 about 10:30 p.m. Saturday. His passenger was killed, and pronounced deceased at the scene, near the intersection with Bet Raines Road.

The FHP identified the victim as James C. Fuqua, 18, of Brewton. He was a senior high school student at Escambia Academy.

Hixon was transported by Escambia County EMS to Sacred Heart Hospital in Pensacola, Fla., in serious condition. He was later treated for his injuries and released.

Ben Odom, sales manager at Johnson Ford, said that Fuqua was a “great kid” who did anything that needed to be done.

“He washed vehicles, cleaned up the shop, filled vehicles up with gas when they were sold,” Odom said. “He did whatever we asked of him. He was a very dependable employee.

“It has just been total devastation these last few days at Johnson Ford. He will be greatly missed.”

EA football coach Hugh Fountain said that Fuqua was probably the strongest player on the team. He was an all-state and all-star selection as an offensive lineman for the 2014 Cougars, who won the AISA Class AAA state championship.

“It’s a tragic loss for his family and for his extended family here at EA,” Fountain said. “He was a great kid and we’re going to really miss him.”

Several maroon-and-gold ribbons were hanging at the EA campus, and the marquee on the school sign read “Fly High James Fuqua” during the week. EA administrator David Walker said the school held a memorial service and chapel for Fuqua and his family on Monday. Grief counselors and pastors were also available for students who needed extra comforting.

“It has just been devastation and shock here the past few days,” Walker said. “When James first started coming to our school, he was a little unsure of himself. But he really grew as a student and as a young man. He believed that he could go to college, and that he could be a success.”

Walker said he appreciated the staff at Johnson Ford for giving Fuqua the opportunity to work and make some money.

“They did a wonderful thing for that young man,” Walker said. “It gave him a tremendous sense of self-worth, and I know he loved that job and loved being there.”

According to the FHP report of the accident, the Ram was traveling southbound in the inside lane of U.S. Highway 29 and approaching Bet Raines Road, when it changed from the outside lane to the inside lane. The truck then began to rotate in a clockwise direction when entering the grass shoulder area.

According to the FHP report, neither Hixon nor Fuqua were wearing a seat belt, and alcohol was not a factor in the crash.