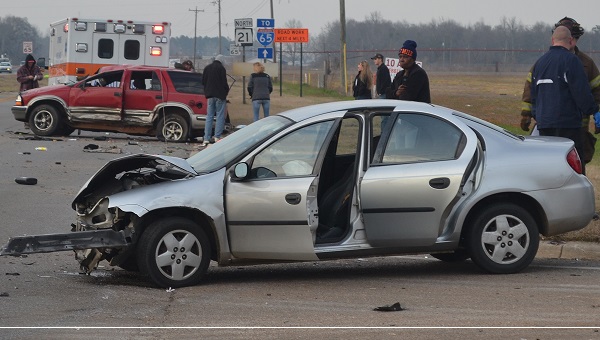 First responders work at the scene of a two-car accident that injured three people Monday afternoon at the intersection of Sunset Drive and State Highway 21 North.

Three people were injured Monday afternoon in a two-vehicle crash on State Highway 21 North, near the intersection with Sunset Drive.

The driver of one vehicle, Kenneth Wayne Kimbler III, 17, of Frisco City, was seriously injured and transported by Atmore Ambulance to Atmore Community Hospital, and then later transported to Sacred Heart Hospital in Pensacola, Fla., by medical helicopter.

Mike Burke, director of public relations for Sacred Heart Hospital, said that Kimbler was still at the hospital Tuesday afternoon and was listed in “fair condition.”

According to the report from the ALEA State Troopers, Kimbler was driving his 1998 Chevrolet Blazer north on State Highway 21 when he approached the intersection with Sunset Drive.

A 2004 Dodge Neon, driven by Ashley Nicole Cotton, of Atmore, was traveling east on Sunset Drive and failed to yield the right of way from the stop sign, according to the report. The Neon struck Kimbler’s Blazer in the driver’s side, and the Blazer overturned several times, ejecting Kimbler from the vehicle.

According to the report, Cotton was not injured. Her passengers, Keylen A. Jones, 18, and Jadesae Eason, 18, both of Atmore, were transported to ACH with minor injuries.

No other information was immediately available, and the ALEA State Troopers are investigating. Agencies who responded also included the Atmore Fire Department, Atmore Police Department and Escambia County Sheriff’s Office.

Mr. Delloyd “Bud” Johnson, 79, of Atmore, took the Master by his hand, as he whispered, “Well Done thy good... read more