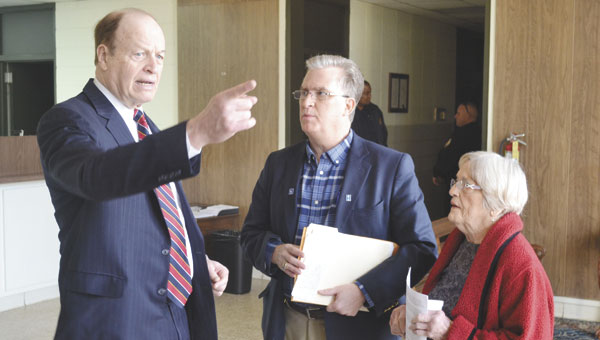 Standing in the lobby of Atmore City Hall, Shelby responded to citizens’ concerns about immigration, the economy, health care and other national issues. Shelby, who was first elected to the Senate in 1986, said this it was the 29th straight year he has made some kind of visit to Escambia County.

Shelby noted he is especially concerned about the continued instability in the Middle East, and the rising magnitude of the national debt.

“There’s no resolution to the challenges (in the Middle East),” he said. “It’s a dangerous situation. Our economy has picked up, although not to the heights that it was before the financial crisis.

“The debt of the nation has gone so high, I don’t know how it will ever be paid off.”

A citizen asked Shelby about national security, and Alabama’s senior senator expressed his concern that open borders pose a potential security risk. Shelby said there is an estimated 12 million to 20 million illegal immigrants in the United States.

Shelby also noted that President Barack Obama’s recent executive action, granting amnesty to 5 million illegal immigrants, was unconstitutional. He said that the House has already passed legislation condemning Obama’s action, but that same legislation is now delayed in the Senate.

Shelby believes that the Republican-controlled Senate should “change the rules” to require 51 votes to end a filibuster, rather than the 60 currently required.

“The Democrats don’t want to bring this bill to Obama and put him on the spot to veto it,” Shelby said.

Ruth Harrell, chairperson of the Coalition for a Healthier Escambia County, and Atmore Community Hospital Administration Bill Perkins both asked Shelby about the inequitable “wage index” in health care. Perkins said that ACH receives $520 less per Medicare patient, when compared to hospitals in Jay, Fla., or Pensacola, Fla.

Shelby said he would bring their concerns back to Congress.

“I’ve tried to be helpful to you over the years,” he said. “I know how important rural hospitals are in Alabama.”

Both mayors in attendance, Atmore Mayor Jim Staff and Brewton Mayor Yank Lovelace, said their cities’ biggest concerns are outdated and inadequate infrastructure. Shelby asked for a member of his office staff to make note of the mayors’ needs, and encouraged them to take advantage of all grant opportunities throughout the year.

Several citizens asked Shelby about his opinions of various Republican frontrunners for the 2016 presidential race, including former Florida Gov. Jeb Bush and Dr. Ben Carson. Shelby did not pick a favorite, but said he believed that the Republicans needed to pick a candidate who would have broad appeal.

Ellis Beachy, the president of EscoFab, told Shelby that it was difficult to hire more employees because of the growing cost of health care premiums. Shelby said he believed that the Affordable Care Act of 2010, commonly known as “Obamacare,” caused more problems than it fixed.

“I believe that we have the best health care system in the world,” Shelby said. “Is it perfect? No. But Obamacare was not the answer.

“It’s all a fraud on the American people. The question
is, can we chip away at it?”

Shelby also argued about the ineffectiveness of the Dodd-Frank Wall Street Reform and Consumer Protection Act of 2010. The legislation was designed to regulate large Wall Street banks, but Shelby said it also punishes smaller local banks by requiring stringent measures that many cannot afford.

“Dodd-Frank put all banks in the same boat, and it’s causing many smaller banks to fail all across this country,” Shelby said. “Those banks are the ones — for the most part — that make the loans for people to start small businesses. They are the backbone of our economy.”