A special event will be held in Atmore in July, to help raise money to find a cure for multiple sclerosis (MS).

The “Don McNeal 5K Community Walk for MS” will be held Saturday, July 25, in downtown Atmore. The walk will begin and end at Pensacola Avenue. Early registration is $20, and late registration is $25 after July 1.

For more information, or to donate to the fight against MS, visit online at www.donmcneal.org. 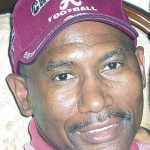 The event is named for Don McNeal, an Atmore native who attended high school at Escambia County High School, where he was a standout on the football team.

McNeal then went to play for Alabama coach Bear Bryant, where he was a member of the national championship teams in 1978 and 1979. McNeal was the captain of the Crimson Tide in 1979.

He went on to play in the NFL for 10 years, spending his entire career with the Miami Dolphins as a defensive back.

McNeal was diagnosed with MS several years ago, but continues to fight against the disease. He plans to be in Atmore for the race.

MS is an unpredictable, often debilitating disease of the central nervous system. It disrupts the flow of information within the brain, and between the brain and the body.