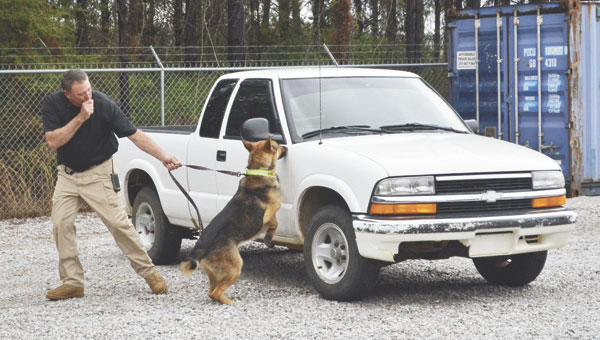 Police officers have to earn regular certifications throughout their careers — even the ones who walk on four legs.

On Wednesday, March 10, police dogs and their handlers from a variety of nearby law enforcement agencies visited Atmore for a drug dog certification test. The test was held at the Poarch Volunteer Fire Department’s Station No. 2.

Cpl. Matt Hunady of the Baldwin County Sheriff’s Office, a certifying official with the National Police Canine Association, explained that the dogs had to find three of four hidden drug stashes in order to earn certification. Two stashes were hidden among four parked cars, and the other two were hidden within the rooms of the fire station.

During the car test, the handlers had eight minutes to find the two hidden drug stashes and correctly identify their locations. The experience was nerve-wracking for some, especially Deputy Jacob Baker of the Conecuh County Sheriff’s Office.

“This is my very first certification,” said Baker, whose dog Orion correctly located both hidden stashes. “I was nervous, but it’s really the dog who is getting certified.”

Baker said he had practiced with his dog in a two-week course at Dixie K-9 in Atmore, which is operated by Escambia County Sheriff’s Deputy Danny Lambert. Baker also practices one day a week for six hours, in order to keep his dog’s skills sharp.

“I’ve wanted to be a police dog handler since I was 7 years old,” Baker said. “It’s the reason I got into law enforcement. Most guys don’t get to be a handler until they’re in their 30s, and I have the opportunity to be one here in my mid-20s. I’m very lucky.”

Some officers were not as lucky as Baker, as several dogs mis-identified the locations of the hidden drug stashes during the testing. Hunady said the mistakes result from a variety of causes, including lingering animal odors that the dog might mis-identify as drugs, or a handler who is in too much of a hurry and doesn’t “read” the dog’s signals correctly.

“I’ve been doing this for nine years, and sometimes you still get nervous when it actually gets to the testing,” he said.