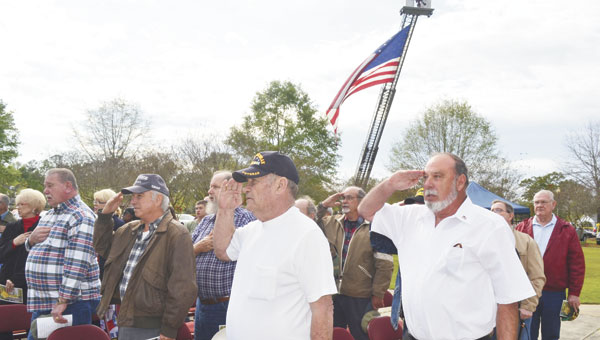 For many Vietnam War veterans, returning home from the war was not always a happy time. Often they were insulted, ignored or worse, and that was the reason the Ladies Auxiliary of the VFW Post 7016 decided to start “Vietnam Veterans Welcome Home Day.”

The second annual Vietnam Veterans Welcome Home Day was held Saturday afternoon at Heritage Park, where about 20 Vietnam War veterans were honored and recognized for their service to their country.

“We’d like to thank you today for your service, your dedication and your courage,” said Ginger Stabler, a member of the VFW Ladies Auxiliary.

“It’s because of that comment, that we’re here today,” she said. “Respect must first be earned, before it is expected. And I want you to know that you have earned our respect.”

Hanks, himself a Vietnam War veteran, spoke about his plane flight home from combat. He said that he was sitting next to a woman, who quickly alerted a flight attendant that she wished to be moved to another seat because she didn’t “want to sit next to a baby killer.”

“That really hurt me,” Hanks said. “[To the Ladies Auxiliary and other organizers], I cannot describe how much your kindness and words of gratitude mean to us. This program really helps with the healing.”

“I wasn’t even born at the time, but I apologize for the way that you were treated when you came home,” she said to Hanks, and the other Vietnam War veterans in attendance.

Albritton said he did not serve in Vietnam, but was a veteran. He related the story of a young man who was serving on the U.S.S. Forestal in 1967, when a rocket accidentally was launched and 134 were killed.

Albritton said the young man was working in a portion of the ship and he and his fellow sailors were badly injured, but they did not once complain or demand to be rescued. Instead, they performed a duty that helped save many other lives, even though it ultimately took their own.

“I look upon you veterans, and I still see your young faces. I see those young men and women who did their duty. And I want to tell you, thank you.”

After the speakers, Ladies Auxiliary members handed out gifts to the veterans, as well as hugs and many words of appreciation. They also presented each veteran with a homemade card from students at Bratt Elementary School.

Celebrate Life 2015 celebrant Charles Metzler of Atmore and his wife, Bertha, stand next to the “Tree of Life” located... read more