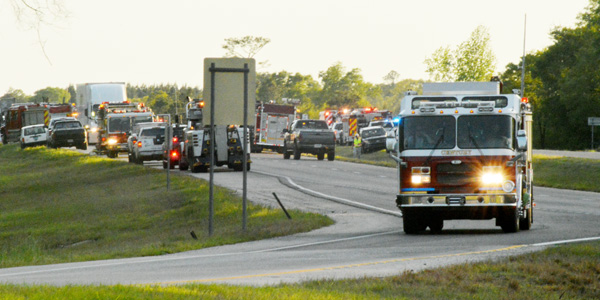 Traffic was halted in both directions as first responders worked at a nine-vehicle crash on Interstate 65 near Exit 69 Thursday evening. One is confirmed dead and six more people were injured.|Photo by Stephanie Nelson, For The Advance

At least one person is confirmed dead and six more were injured in a nine-vehicle accident on Interstate 65 North, near Flomaton.

Traffic was at a halt on both lanes as emergency crews worked at the scene following the accident, which occurred just before 5 p.m. Thursday.

Alabama State Troopers, Escambia County Sheriff’s Office deputies, Flomaton Police, and others responded to the crash, which took place near the 69 mile marker.

Initial reports indicate that at least one of the vehicles involved was an 18-wheeler, and multiple other vehicles caught on fire. There were reports of entrapment as emergency personnel were dispatched from Brewton, Flomaton, Atmore, Poarch, Century, Fla., and many other agencies.

Chief Deputy Mike Lambert said six people were transported from the scene to various hospitals, while three were air lifted.

“It was a mixture of passenger cars and a loaded 18-wheeler,” Lambert said. “Luckily, nothing was hazardous in the cargo.”

Drivers are advised to use caution traveling through the area and to use alternative routes if possible.

For those currently sitting in the southbound I-65 lane, get off at the Flomaton/Wallace exit or the Brewton/Repton exit.

Atmore Public Safety Director Glenn Carlee said that the interstate has also been closed north of Exit 57, and all traffic is being diverted south on Highway 21 through Atmore, and then east on U.S. Highway 31 to Flomaton.

Traffic is expected to be heavy “all night long,” and Carlee said that APD officers are working downtown to direct the traffic flow. Motorists are cautioned to avoid downtown Atmore Thursday night, if they can.

Earlier Thursday afternoon, six people – including five children – were critically injured in a crash on I-65 north between Brewton and Flomaton.

Three of the injured were airlifted to a Florida hospital while the remaining three were transported to local hospitals.

The accident occurred at the 73-mile marker at approximately 2:30 p.m., and involved a Michigan family in a Ford E350 van pulling a travel trailer.

Katelyn Sudduth and her family from Winston County, Ala., were in front of the van when the crash occurred.

“The wind was really bad,” she said. “We could see the camper swerving back and forth between the lanes. We were going about 75, and they were right there behind us.

“We sped up to 85, trying to get away, but they were still coming,” she said. “That’s when they switched lanes and things went bad. The trailer went sideways, and then it all just rolled I don’t know how many times.

“There were five kids, one adult and a dog,” she said. “The dog looks OK, but the others – well, we hope they’re going to be OK.

“One boy, he landed in the bushes, but he wasn’t hurt,” she said.

Lambert said two of the occupants were ejected from the vehicle. However, no official word was available on the condition of the remaining occupants.