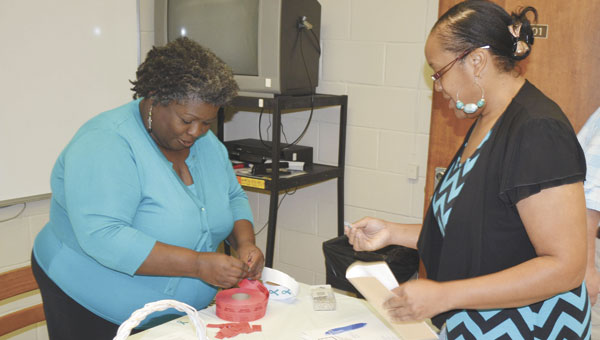 JDCC interim president Dr. William Blow signed a proclamation emphasizing the college’s commitment to sexual violence prevention, and there were various other activities that took place on both the Brewton and Atmore campuses throughout the day.

In Atmore, faculty, staff and students signed their own personal proclamations, declaring their willingness to fight sexual assault and sexual abuse on their campus. In addition, the campus was decorated with teal ribbons and balloons — teal is the official color of sexual assault awareness.

Heather Cook, sexual assault program manager at The Lighthouse, spoke to the students about the services offered by agency. The Lighthouse is an agency that serves Baldwin and Escambia counties, and offers counseling and advocacy to victims of sexual assault and domestic violence.

“I like seeing all of the support and all of the team on your campus today,” she said. “There are already some good support services in place for sexual assault victims, and it’s good to have you join the momentum.”

“They just are someone to talk to, or someone to help with counseling, or even just someone to offer a shoulder to cry on,” Cook said. “The program has been very successful in Baldwin County and we hope to eventually offer it in Escambia County as well. Maybe some of you might want to consider volunteering, as you become older.”

Cook said that The Lighthouse also offers 24/7 hotlines for victims, and has an aggressive public awareness campaign. She said that Lighthouse representatives visit schools regularly, to educate the students about bullying, healthy relationships, and “safe dates.”

“Bullying at a young age is often a red flag of someone who might eventually commit sexual assault,” she said. “It’s important to try to teach these lessons at a young age.”

Jennifer Pollitte, a JDCC employee who has been assisting the college with the April events, said that the statistics concerning sexual assault are staggering.

• One in five women will be a victim of a completed or attempted sexual assault while in college.

• One in 16 men will be a victim of sexual assault during college.

• Among college women, nine out of 10 victims of rape and sexual assault knew the person who assaulted them.

• More than 90 percent of sexual assault victims on college campuses do not report the assault.

• Forty percent of U.S. colleges and universities reported not investigating a single sexual assault in the previous five years.