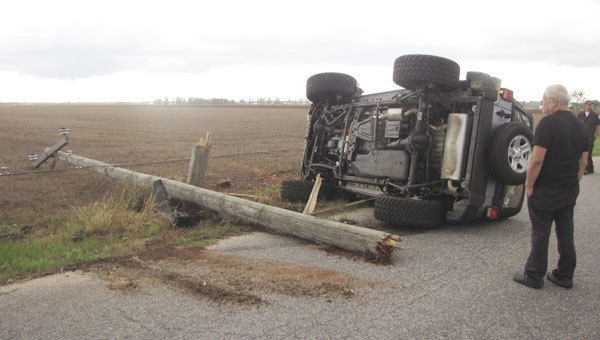 One person was injured after this Jeep collided with a power pole on Chapman Road late Thursday afternoon.|Photo by Michelle Smith

One person was hurt Wednesday afternoon, after a Jeep hit a power pole on Chapman Road around 4 p.m.

According to first responders on scene, a passenger in the Jeep was transported to Atmore Community Hospital by ambulance, after experiencing a leg injury. The driver did not appear to be badly injured.

The power pole broke at the base and laid across the field. It was not immediately known if any citizens’ electricity was affected. The pole was maintained by Southern Pine Electric Cooperative.

The accident took place just north of the intersection with U.S. Highway 31.