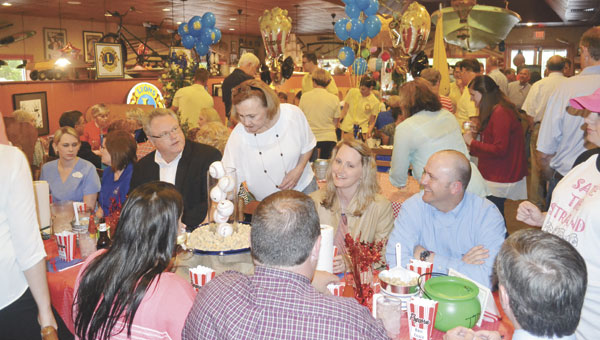 There was hardly an empty seat in David’s Catfish House on Monday evening, during the “Celebrity Server Dinner” to benefit Pride of Atmore and Save the Strand.

More than 200 hungry citizens braved the sporadic rain Monday night to enjoy good food, and help out a worthy local cause.

First National Bank & Trust held its annual “Celebrity Server” dinner at David’s Catfish House on Monday night, where local celebrity citizens work as waiters to collect tips from hungry patrons. Those tips then go to support an important cause in the community.

This year, FNB&T chose to give all of the proceeds to the Pride of Atmore civic group and its main project — the “Save the Strand” campaign.

“This is all Sheilo Faircloth’s idea,” said Glen Davis, president and CEO of FNB&T. “She recommended that we should do something local, and we’re going to do a local cause from now on.”

Save the Strand committee chairman Bub Gideons said that FNB&T has always been a crucial partner in Pride of Atmore’s successes. He noted that the bank developed a unique loan structure that allowed Pride of Atmore to purchase the Strand and make timely payments, while still having the flexibility to seek out grant funding and other streams of income.

Gideons said that Foster Kizer recently donated his time to help with the grant writing process.

“Thank you all for coming out and supporting us,” he said.

Davis said that 190 people purchased tickets to last year’s Celebrity Server Dinner, and he expected there to be 215 tickets sold this year. Although the final amount raised was not available by press time, Davis estimated it would likely be between $10,000 and
$12,000.

Davis said that almost 300 pounds of crawfish and more than 200 pounds of shrimp were prepared for the dinner.