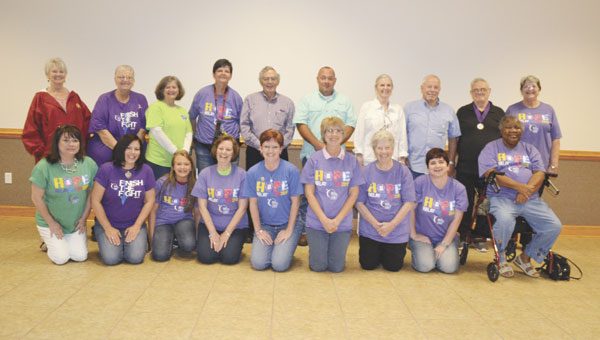 The cancer survivors in attendance Friday joined together for a photo to celebrate their solidarity in fighting the horrific disease.

After spending years of battling the horrible disease of cancer, a few drops of rain weren’t going to scare away the dozens of survivors at Friday’s Relay for Life “Night of Hope” reception.

The reception was held at Brooks Memorial Baptist Church, where local cancer survivors were celebrated for their courage.

“The reason that we have this event is so that you can be recognized for the successes that you’ve had in your life,” said Cindy Lee, who organized the reception. “It’s also a chance for you to meet others, who have had the same experiences that you have had.”

The reception and other Relay for Life events had been originally scheduled for Heritage Park, but the threat of inclement weather forced the reception to be moved. The prediction was accurate, as rain periodically fell throughout the evening, but it did not put a damper on the celebration.

Atmore Mayor Jim Staff read a proclamation from the city, and noted that he has had an uncle and brother who both died from cancer.

“It’s good to see all of the survivors here who have made it,” Staff said. “This is a lovely setting. You won’t have to slosh around in the water.”

Prior to refreshments, Terry Elkins received special recognition as the longest survivor in attendance. Elkins’ cancer was first diagnosed in 1966, almost 50 years ago.

Lee also pointed out two large cloths, which were covered with purple handprints of the survivors who have attended the reception throughout the years.

“We’ve had so many, we had to start a second cloth,” Lee said proudly.

Megan Robinson, community manager for Relay for Life, said that it was inspiring to see so many people attend Friday’s reception.

“Thank you all for coming, and congratulations to all the survivors,” she said.