An Atmore man is wanted after an incident that put Escambia County Middle School on lockdown last week when he allegedly strangled his mother and threatened to shoot police who arrived to provide help.

Chief Deputy Mike Lambert of the Escambia County Sheriff’s Office said deputies responded on Tuesday, May 6, to a 911 call at a home located on Jimbos Road, very close to Escambia County Middle School. The call was made around 11:30 a.m. 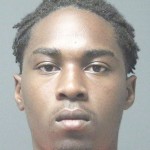 “Deputies responded to the home after receiving a 911 that someone at the residence was armed with a firearm and was threatening to shoot law enforcement if they could,” Lambert said.

Lambert said, as a precaution, the school was placed on lockdown for nearly an hour.

“When deputies arrived, they learned that the two had gotten into a physical altercation and Watkins had fled in a grey SUV, which was later located on North Sunset where it is believed he got into an other vehicle,” he said.

Warrants have been issued for Watkins’ arrest, Lambert said.

“In this case, he lives there with his mother, who during the incident, pulled a knife to defend herself,” he said. “We are currently searching for Watkins, but if he would call and surrender himself, it would make things a lot less complicated.”

Anyone with information as to Watkins’ whereabouts is asked to call (251) 809-0741 or any law enforcement agency.

The city of Atmore will install a four-way stop sign at the intersection of Sowell Avenue and Perch Street. The... read more