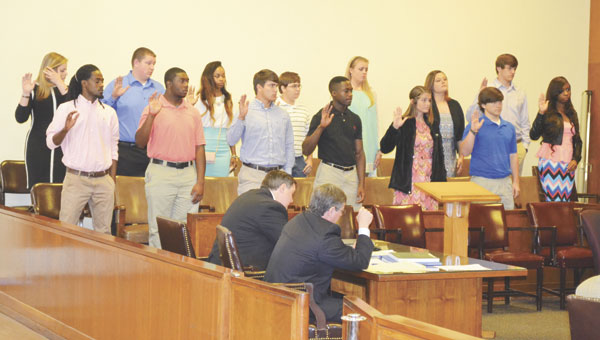 Fourteen area high school seniors served as jurors, and many more got a chance to learn about the legal system, during the annual “Law Day” celebration Thursday morning.

Law Day is a unique opportunity for students to serve as the jury in an actual court case, with actual consequences for the defendants. Unlike mock trials and similar events, Law Day is as real as it gets, something that Circuit Court Judge David Jordan reminded the students.

“This is a real case,” he said. “I trust that all of you will treat it with the gravity and seriousness it deserves.”

Several Poarch police officers testified that they had pulled over Thomas’ vehicle near the intersection of Poarch Road and Highway 21, on Feb. 6, 2014. They said that Thomas failed several sobriety tests and also appeared to have a mixed beverage in the car.

During her defense, Thomas said that she had several medical problems that prevented her from completing the tests. She also insisted that the drink was just a soft drink, and contained no alcohol.

After deliberating for about 20 minutes, the student jury returned verdicts of “guilty” on both charges.

Earlier in the morning, the students heard from special speaker Ricardo Woods, the Mobile city attorney. Woods demonstrated the importance of voting and serving jury duty, by taking several students’ wallets and cell phones and declining to give them back.

“That’s what you’re doing when you vote or serve on a jury,” he said. “Your making sure that your voice is heard, and you’re speaking out against unfair treatment.”

Woods asked for the students to clap in unison, in order to show strength in numbers, and then returned the items.

Local attorney Charles Johns Jr., the president of the Escambia County Bar Association, thanked Woods for his speech and for attending the presentation.

While the jury was deliberating, District Judge Jeff White spoke to the remaining students about the court system.

“I believe that we have the best court system in the world,” he said. “It’s not perfect, but it’s the best in the world.”

Jordan thanked the students for attending and said he hoped they learned valuable lessons during the day.

“Now when you get called for jury duty, you’ll know what to expect,” he said. “There will be no fear of the unknown.”

The infrastructure of a new culinary arts building will soon be constructed on the campus of Escambia County High School... read more