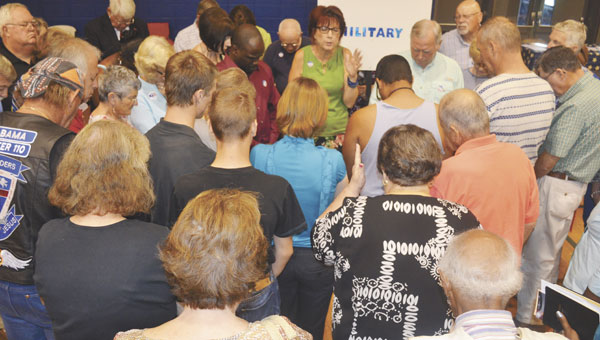 The city of Atmore came together Thursday, to celebrate the National Day of Prayer.

Events early in the morning included a prayer walk at Atmore City Hall, as well as special prayers for first responders and government officials.

The main observance took place Thursday evening, at the Cornell Torrence Gymnasium on the Escambia County High School campus. During the evening, citizens of all races, denominations and ages joined together to pray for seven aspects of life — government, church, family, education, media, military and business.

After the prayer time, everyone joined together for a communal reading of the Bible. Each person had a separate passage to read out loud, and by the time the 15-minute reading was over, every verse in the Bible had been recited.

Children were also invited to participate in a prayer’s service with Miss Tippytoe.

Walnut Hill pastor the Rev. Ted Bridges provided the opening prayer, and invited everyone to participate in the night’s activities.

“We are here today, united in one purpose,” he said. “We are the best nation in the world, and we just want to stand in the gap and let God hear our prayer.”

Logan Diller read the pledge of allegiance, and Atmore Mayor Jim Staff read a proclamation from the city. Willonette Hammonds then blew a shofar — an instrument made of an animal’s horn — to signify that the prayers were to begin.

Prior to the prayers for the seven subjects, there was a special “Prayer of Repentance” led by special guest Tom Demaree.

Demaree is the founder and director of Pentecost Walk. He has walked more than 16,000 across the U.S., helping to bring prayer and God’s message of repentance to all 50 states and thousands of churches.
During the repentance prayer, Demaree asked for the crowd to repeat the phrase “make us one” four times, symbolizing a unified prayer effort.