Mike Hanks has spent more than 27 years helping veterans, and now he’s enjoying the chance to spend more time with his family and hobbies.

Hanks, who had been the Escambia County Veterans Service Officer, retired from that position on May 1. Although Hanks is no longer working in the veterans service office, it remains open three days a week at the Escambia County courthouse satellite office on U.S. Highway 31.

Hanks said that VSO representatives from other counties would be staffing the office for the rest of the year. It is open Tuesdays, Wednesdays and Thursdays, from 8 a.m. to 3:30 p.m. 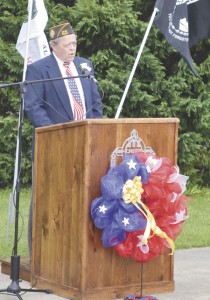 “It might be a different person, depending on who is filling in that particular day, but it will remain open,” he said. “Hopefully, if funds are available at the start of the new year, they’ll be able to hire someone full-time to fill the position.”

Hanks first took the VSO job 27 years ago, and admitted that he was making a gamble. At the time, he had a successful career in a construction company, but that job had no benefits or pension.

When Hanks saw the position advertised in The Atmore Advance, he decided to take a chance and apply.

“I really didn’t know a lot about the job, other than that it was a state job that had benefits and retirement, which is what I was looking for,” Hanks said. “But it ended up becoming one of the most enjoyable jobs that I could have ever had.”

Hanks said that a lot of citizens called him the “VA man,” but noted that the Veterans Administration is a federal agency, and there are also a number of state agencies that assist veterans. He not only informed veterans and their families about their benefits, but also went to bat for those who got turned down.

“I really enjoyed seeing someone’s face after they learned about some of the benefits that were available to them,” he said. “And it wasn’t always monetary. There are educational programs, health benefits, loan programs — there are a lot of programs to help our veterans.”

Hanks grew up in the Atmore area, graduating from Ernest Ward High School in 1969. He was drafted into the U.S. Army in 1971, in the middle of the Vietnam War, and served for two years before returning to civilian life.

Hanks was a special guest speaker at the “Welcome Home Vietnam Veterans” ceremony held Saturday, March 28, at Heritage Park. At that ceremony, he spoke of his time in the military, noting one time when he was called a “baby killer” by a woman on an airplane flight.

“Our veterans have been through so much, and I’m just happy I was able to help them out however I could,” he said.

Since his retirement, Hanks said he has been working on projects around his house, and is also excited that he will be able to take a long family vacation during the Memorial Day weekend.

“I’ve probably come close to killing myself these first few weeks of retirement,” he said, with a laugh. “I’ve been doing so much around the house and wearing myself out. I need to remind myself that I’m not on vacation, I’m retired — I can pace myself out a bit more.”

Hanks has been married for 45 years to his wife, Gayle, and they have two children and five grandchildren.