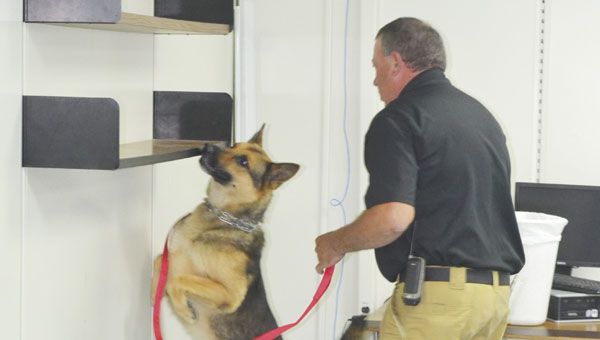 Even though school was out, there were still plenty of “four-legged” students roaming the halls of Escambia County High School on Wednesday, June 3.

Police dogs from five local law enforcement agencies visited ECHS for a drug search certification test. The dogs, and their handlers, were given a short amount of time to correctly find stashes of drugs that had been hidden in five different classrooms — marijuana, heroin, cocaine, ecstasy and meth.

“A school is easier to work with because you have multiple rooms in a centralized location,” Willard said. “Some buildings have small rooms that make it hard to do tests, but the rooms at a school are usually bigger and have more places to hide the stashes.”

Lambert took the exam with Ajax, one of the K-9 Unit’s drug dogs, and said that regular certification is important for any dog handler in law enforcement.

“Every year, we’re required to get at least one certification, but I try to get two or three,” Lambert said. “It’s a good thing for officers from different departments to get together like this, to learn from each other.”

YMCA fitness director Maria Love-Davis and CEO Paul Chason look on as Carolyn Coleman tries out some of the new... read more