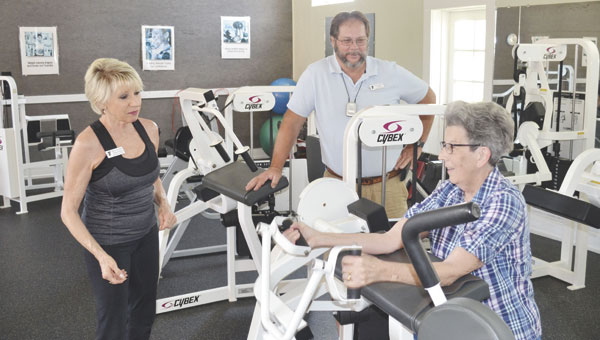 YMCA fitness director Maria Love-Davis and CEO Paul Chason look on as Carolyn Coleman tries out some of the new Cybex equipment at the YMCA.

Visitors to the Atmore Area YMCA will notice a lot of changes, thanks to the support of local donors and benefactors.

Paul Chason, CEO of the YMCA, said that the facility was recently able to add 25 new pieces of fitness equipment from top-class companies like Cybex and Hammer Strength.

“Thanks to the contributions of a local benefactor, who wishes to remain anonymous, along with smart budgeting, we have been able to add some very good equipment,” Chason said. “It allows us to have some machines that will work muscle groups and exercises that we weren’t able to offer before.”

The new equipment has also required some changes inside the facility. The nursery is now located in the old after-school activities room. The old nursery has been converted into a free-weights room, which contains some of the new equipment as well as dumbbells and barbells for powerlifting.

Chason said that the change will not only improve the YMCA’s fitness offerings, but also offer a larger space for the nursery to grow. The nursery is open Mondays, Wednesdays, Thursdays and Fridays from 8 a.m. until noon, and Mondays through Thursdays from 5 p.m. to 8 p.m.

Chason said that the ultimate plan is to convert the old free-weights room into a cardio-focused facility.
Maria Love-Davis, fitness director at the YMCA, said that visitors have already been excited about the changes.

“Cybex is top-of-the-line equipment, and we have some machines now that we’ve never had before,” she said.

The YMCA was also able to purchase two additional treadmills and two elliptical machines, increasing its options in the cardio room.

“Certainly, any time you have a change, people are initially apprehensive,” Love-Davis said. “But as soon as the member tries out some of the new equipment, and learns how it works, they can’t wait to use it.”

Chason said that he has had some members express concern that the free-weights room is too small and crowded, but hopes that the location may only be temporary.

“I understand the complaints that it’s a little small, but we’re limited because of the layout of the building,” he said. “Hopefully we can continue to grow our membership, and we’ll be able to move into a larger room.”

Atmore police are asking the public to keep an eye out for this white Ford Crown Victoria, whose driver may... read more