Another hotel for Rivercane? 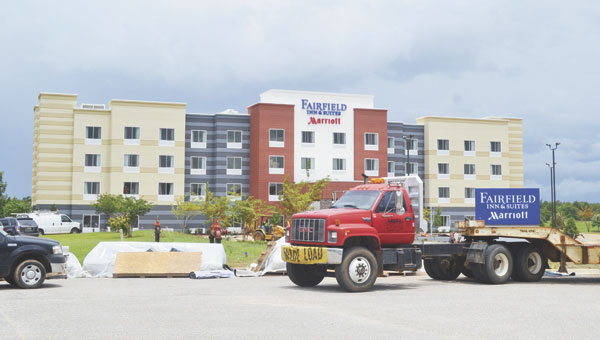 Work continues at the Fairfield Inn and Suites, which is projected to open sometime in August. Another hotel company has expressed interest in coming to Rivercane sometime in the coming months, as well.

The new Fairfield Inn and Suites in the Rivercane development is expected to open sometime in August, and the area may get another hotel soon after.

Tim Herrington, of Herrington and Associates, told the Atmore Industrial Development Board on Thursday that he had recently met with representatives from a “corporate hotel franchise group.”

“They are very interested in putting another hotel next to the (Fairfield Inn and Suites),” he said. “The hold-up is that they’re waiting for them to open, to be honest with you.”

Board chairman Richard Maxwell asked if the company would wait “six to eight months” to see how the occupancy levels are at Fairfield Inn and other hotels in the area.

“I don’t think it’s going to be that long,” Herrington said. “I just think they want them to open up, to see where everything is for 30 days, and then they would move forward.”

Herrington said he had been in contact with the group as recently as last Wednesday, and they are very interested in moving forward quickly.

“They want to go right behind the Hardee’s, on that little section — Hotel Road,” he said.

Atmore City Code Enforcement Office Greg Vaughn also told the board that the Fairfield Inn and Suites should be ready to open by sometime in August.

“They’ve got sheet rock up on the second through fourth floors, and a good portion of the first, which may be complete by now,” said Vaughn, who toured the construction several weeks ago. “They’ve painted and are putting in furniture. At that time, they were just waiting on plumbing features.

In other business, the Atmore Industrial Development Board:

• Heard from Vaughn that progress is continuing at the city’s “Advantage site” in the industrial park in Rivercane.

“This is one of the steps that we had to fulfill to get to the next level,” she said.

• Heard from Atmore Mayor Jim Staff that the Alabama Department of Transportation could provide approximately $100,000 in engineering for a lighting and landscaping project at the Interstate 65 interchange, but the labor and other costs would be the responsibility of the city.