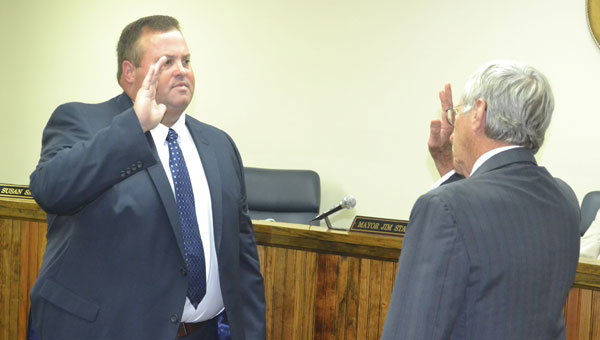 Both Atmore Police Chief Jason Dean and Atmore Fire Chief Gerry McGhee have decided to retire from the city of Atmore.

Brooks has been in law enforcement for more than 25 years, and has worked in investigations for 20 years.

“I was a little shocked when I was asked if I would take the job,” said Brooks, who was joined Monday by family and friends. “I immediately said yes. I feel like I’ve got lots of years of experience, and I’m excited for this new challenge.”

Brooks said he appreciated working with Dean, and learning from him.

“I’ve learned a lot in my years with Jason,” he said. “We worked together on a lot of complex cases. I wish him nothing but the best, and a great retirement.”

Carlee told the council that McGhee actually officially retired “five or six years ago,” but then entered the DROP (Deferred Retirement Option Program) program. The DROP program allows for public employees who have already reached retirement age to continue working, in return for financial incentives.

On Tuesday, Carlee expressed his appreciation to McGhee and Dean in a statement, which read:

“The city of Atmore will be losing the services of two valued employees in the near future. While I am happy that they have reached that threshold in their life, their personalities and their loyalty to the citizens of Atmore will be greatly missed.

“Fire Chief Gerry McGhee has served the city of Atmore for 38 years, has been on call the entire time all hours of the night and weekends, he took care of his officers and co-workers and performed any and all tasks asked of him without a single complaint. His experience and expertise will be difficult to replace.

“Police Chief Jason Dean has served with the Atmore Police Department for 26 years. Twelve of those years as chief of police, which to my knowledge is the longest tenure of a police chief with this department, at least within my 41 years of service. Chief Dean has served with distinction, and with honor. He is a loyal employee and has always put the interest of his co-workers first. Chief Dean never asked an officer to perform a task that he would not or had not done himself.

“I sincerely appreciate the efforts and cooperation of these two individuals over the years and I am grateful to both who have agreed to stay on in an advisory capacity to help ensure the transition of the new appointments. That gesture alone is a tribute to their dedication to the city in which they served for so many years. I will miss you both.”

Whatley retiring from city as well

Atmore Mayor Jim Staff said that Don Whatley, the city’s street superintendent, has also decided to retire. Whatley has been with the city more than 30 years, Staff said.

“Don has hired everybody who’s in that department now, and he’s been like a father to them,” Staff said. “He’s a great engineer and is great at solving problems. We couldn’t ask for a better man in that position. He really could do it all.”

Staff said no replacement has been named yet, but it is likely that an existing employee in the department will be promoted.

Thomas Guy Byrne III, 60, of Atmore, passed away Wednesday July 8, 2015, in Fairhope. He was employed by Masland... read more