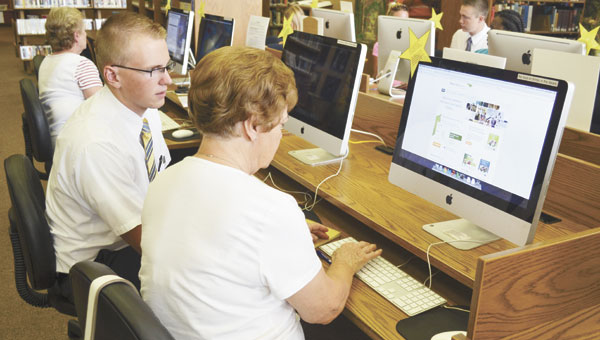 Several Atmore citizens visited the Atmore Public Library on Thursday, but rather than searching for their favorite books or movies, they searched for their family histories.

The library occasionally hosts free Ancestry.com classes, which allow for citizens to learn how to use the popular genealogy program. By using the library’s computers, they can also bypass the typical fee that Ancestry.com charges users.

Ancestry.com, and similar websites, use a combination of public records and user-entered memories to develop a “family tree” for an individual. By entering something as simple as parents’ names and birthdates, a user can discover an intricate web of records stretching back generations.

Pat Anderson said that she took the class because she wanted to document her family’s history for her grandchildren.

“I think it’s important for us to know about our roots,” she said.

Anderson came ready for the class with a binder full of information she had collected on previous Ancestry.com searches, as well as historical information saved by family members. She said that her genealogical search has allowed her to discover as far back as 15 generations, including some descendants that lived in the 13th century.

“It’s an amazing website and it’s fun to see who you’ve descended from,” said Anderson, who even discovered that her grandmother’s great-great cousin was Mary Todd Lincoln, the wife of president Abraham Lincoln.

Two elders from the Church of Jesus Christ of Latter Day Saints (LDS) led Thursday’s class. Elder Browning and Elder Jorgensen — who requested to use last names only — assisted with the computers and also provided guidance for the searches.

“It’s all about allowing people to get closer to their families,” Browning said. “We feel that knowing about your past, can help bring you closer together in the present.”

Browning said that the LDS maintains a similar site called FamilySearch, which recently joined a partnership with Ancestry.com. Ancestry.com itself is also based in Provo, Utah, which has a high population of LDS members.

“Our church has always put a strong emphasis on genealogy and family history,” Browning said.

Browning said that he and Jorgensen are missionaries for the LDS church, and their work with the Ancestry.com classes is one way they try to improve the quality of life in their community.

“It’s about sharing the gospel message and also helping people,” he said. “We think this is a great tool to help bring families together.”