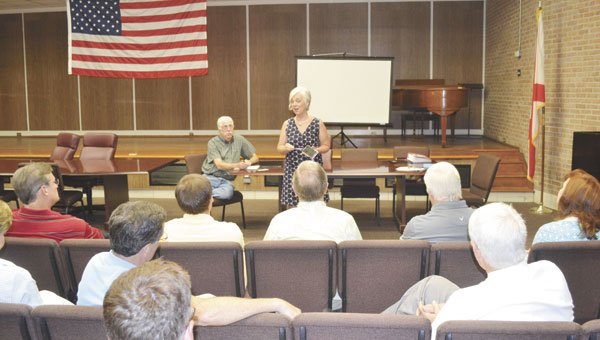 Yolanda Johnson, a business counselor with the Alabama Small Business Development Center Network, talks to citizens at a meeting Thursday to discuss ways to grow downtown.

A group of concerned citizens came together Thursday morning to brainstorm ideas to stimulate growth in downtown Atmore.

Atmore’s Foster Kizer helped organize the meeting, which was held at the Atmore City Hall auditorium. The special guest was Yolanda Johnson, a business counselor with the Alabama Small Business Development Center Network.

Kizer noted that one of the biggest obstacles for downtown Atmore is finding a way to get motorists to stop on their way through town. Atmore is on the way to two major tourist hotspots — the Wind Creek Casino and the beaches.

Johnson said community members should develop a written strategic plan for growth in the downtown area, determining what kinds of businesses might be able to attract customers. She noted that several small towns have been able to thrive by attracting artists and unique restaurants.

Johnson also said business incubators are a good way to grow a downtown area, and praised the work done by United Bank to develop its incubator on East Church Street.

She also gave several suggestions for ways to grow foot traffic downtown, including allowing artists to set up small studios outside existing businesses. Johnson noted that many store owners in other cities do not even charge the artists to rent the sidewalk space, because they are so good at attracting potential customers for those store owners.

“They could do some shopping or eat dinner, and then go to the show afterwards,” she said. “It would help revitalize downtown on those nights.”

Atmore Mayor Jim Staff said that he appreciated Johnson’s visit, and also the support of the several dozen citizens who showed up to the meeting.

“What we’re doing today is a good start,” he said.