Peebles replaces Gerry McGhee, who announced his official retirement earlier this month. Grace replaces Don Whatley, who had been with the city more than 30 years before his retirement. 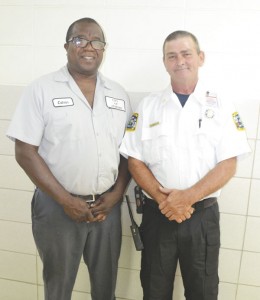 “It’s just amazing to me that we did all this within our community,” Staff said. “We didn’t have to go outside and look anywhere, we had it right here waiting on us.”

Peebles said he looked forward to continuing to serve the community.

“I feel honored to hold this position,” he said. “I’ll keep serving the people of Atmore and the surrounding area, just as I have for the last 15 years.”

Grace thanked the mayor and city for giving him the opportunity to follow Whatley. Grace had previously been the city’s assistant superintendent in the streets department.

“I want to thank you all for giving me this opportunity,” he said. “I’ll continue to do the job.”

• Approved to begin the bidding process for a new trash truck. Staff said that the city has one that is about to wear out, and needs to buy a replacement.

• Approved Resolution 11-2015, which allows city employees to convert remaining sick leave into real hours at the time of retirement. Staff said this change should have been made in 2005, at the same time that the West Escambia Utilities Board allowed the change.

• After the meeting, Staff told reporters that work will begin soon on a paving project for portions of Medical Park Drive and Martin Luther King Jr. Drive. The project is funded through a state ATRIP (Alabama Transportation Rehabilitation and Improvement Program) grant.

Staff said that a pre-construction meeting is scheduled for Thursday, Aug. 13, and the paving will begin shortly after that date.

Free supplies, backpacks will be given away

The Escambia Baptist Association of Churches will be providing free backpacks with selected school supplies for any elementary school students.... read more