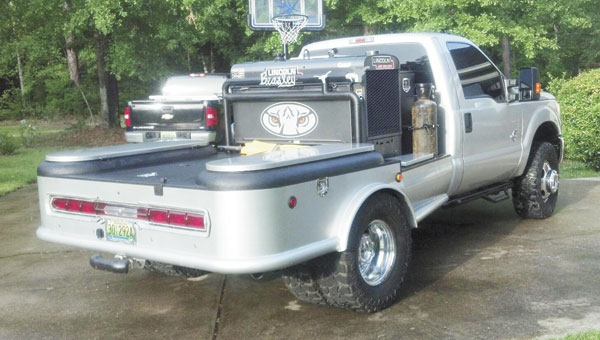 The stolen truck was quickly recovered.

A pickup truck stolen early Sunday morning from an Atmore home was quickly found and returned to its owners Monday.

Atmore Police Chief Chuck Brooks said that the Atmore Police Department is still investigating the crime, but has determined a potential suspect. As of Tuesday afternoon, no arrest had been made in the case.

“I know that the care was processed for fingerprints, and hopefully we’ll be able to match them to our suspect,” Brooks said.

The stolen vehicle was a silver 2013 Ford DRW Super Duty pickup truck, with a large tool box and welding equipment on the back. It was reportedly stolen from Lauren and Jace Beasley’s yard early Sunday morning, but it was recovered Monday morning in Century, Fla.

“The truck was recovered, and thankfully it was not damaged,” he said. “None of the parts or equipment was stolen.”

Brooks ruled out the possibility that the vehicle had been taken as a prank.

“We are treating this case as a theft,” he said.

Lauren Beasley said her husband Jace is a welder and uses the truck in his business, so it was a real blessing to recover it Monday morning.

Beasley posted on her Facebook page at approximately 6 a.m. Monday, “Praise God they have found Jace’s truck and in one piece!! I can’t thank everyone enough for sharing the pictures and being so helpful in trying to help us find it!!”