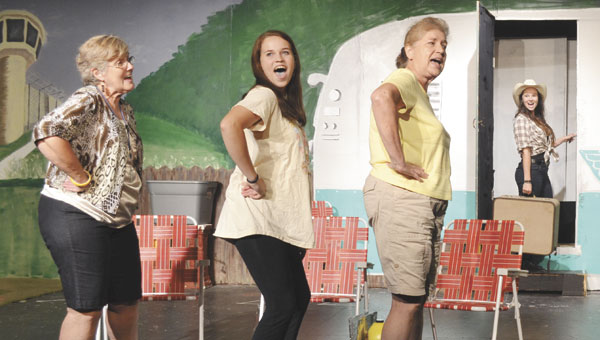 Betty (Sharon Poulsen), Pickles (Melissa Wilson), Lin (Gilda Stubben) and Pippi (Emily Danforth) sing about living on the “Right Side of the Tracks.”

Who says that musicals have to be “stuffy” and “classy?”

That’s definitely not the case with The Great American Trailer Park Musical, which will have four performances this week at the Greater Escambia Center for the Arts (GECA), located at 100 S. Trammell St. in Atmore.

Tickets are $10 and are available at the Atmore News office, located at 128 S. Main St. Performances are Thursday through Saturday, at 7 p.m., and Sunday at 2 p.m.

It should come as no surprise that the musical is primarily set in a trailer park — Armadillo Acres, located in the Florida town of Stark. The cast features the colorful residents of that park, including married couple Jeannie and Norbert Garstecki, park manager Betty, and friends Pickles and Lin.

Their mundane lives are turned upside down when a new resident named Pippi moves to the trailer park, and a heavy thunderstorm knocks out power for hours.

Director Phil Johnson said that GECA’s performance will be family friendly, and is sure to bring laughs.

“There is no fear of being embarrassed by anything your kids might see if you bring them to the theater,” he said. “This show is very funny, and it’s probably as ‘Southern’ a production as we’ve ever done.”

Some of the musical numbers include “This Side of the Tracks,” “The Great American TV Show,” “Flushed Down the Pipes” and “Road Kill.”

Johnson said that he always appreciates the hard work of GECA performers, but this production may have required even more tenacity than usual.

“When we lost Annie, we really had to scramble to put this musical together quickly,” he said. “This cast has done an admirable job.”

Johnson said that two factors can help bring large audiences to a GECA musical — a familiar name, or children in the cast.

“Unfortunately, this show doesn’t have either of those,” he said. “But I hope that people will give us a chance. It’s a very funny show filled with wonderful songs, and I know that you’ll have a great time.”

A Brewton man, wanted on escape charges, was located in Atmore on Saturday after wrecking his car on Woods Road.... read more