Marchers rally against ‘the enemy’ 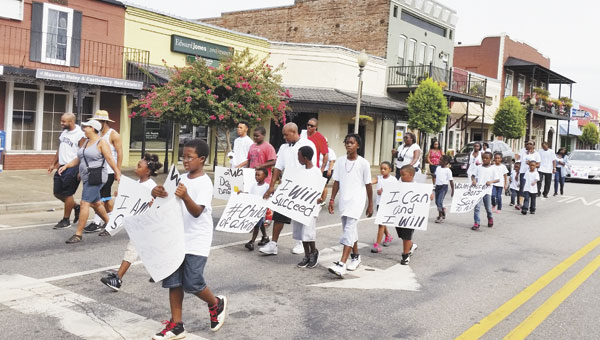 More than 60 people from several area churches came together Saturday morning to take a stand against “the enemy, the devil.”

The “Walk-N His Way 2015” march and rally was designed as a way for the community to come together in the face of adversity, according to Anson Windham, one of the event’s organizers.

“It was about an effort to take our youth back from the enemy, the devil,” Windham said. “In our modern world there are a lot of bad influences, and we just wanted to show that the community is behind them 100 percent.”

Windham said that the rally was scheduled for early August, because it comes right before the return of school.

“We wanted to give the kids a positive message to take to school with them throughout the year,” he said.

The march started at Atmore City Hall on Saturday morning, and continued down Main Street before ending near Escambia County High School. A program was scheduled after the march.

Windham said there was also a workshop Thursday evening at Jones Street True Pentecostal Holiness Church, which was the organizer of the event.

“We had some wonderful speakers and it was a very powerful night,” he said.

Windham thanked everyone who participated in Walk-N His Way 2015, as well as businesses and individuals who donated to the effort.

With a $500,000 shortfall in the county’s general fund budget and an untold amount facing the county coffers beginning in... read more