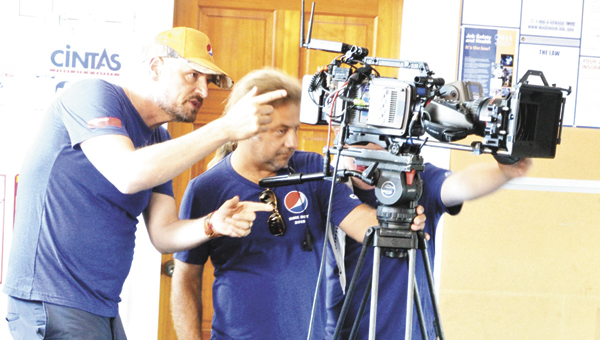 Many locals might have seen the large film crews in downtown Atmore late last week and wondered what was happening.
The crew was there to film footage of the area for an award presentation later this year. Pepsi-Cola Bottling Company of Atmore is one of three finalists for the Donald M. Kendall Bottler of the Year award, which recognizes the top franchise in the United States and Canada.
“To be eligible, you have to have three to five years of continuous growth,” said Dale Ash, owner of Pepsi-Cola Bottling Company of Atmore. “This is the first year that we’ve been a finalist.”
The other two finalists are operations in Gulfport, Miss., and Winston-Salem, N.C. The award will be presented Tuesday, Sept. 29, at a national bottlers’ meeting in Kissimmee, Fla.
Each finalist will have a video presentation of approximately seven to eight minutes, making its case for the award and also showing images of its employees and communities. That is the reason the 15-member film crew was in town, to film scenes at several locations important to the local bottling company — including Pepsi-Cola Bottling Company’s headquarters, Matthews Landing and The Strand Theatre, among others.
Many of the film crew members were from noted film schools in New York City and Los Angeles, while others were grips and assistants from New Orleans, La. Director Matti Leshem has been producing these video presentations for PepsiCo for 11 years.
“This has to be one of my favorite locations that I’ve ever visited,” he said. “I love telling these stories, and showing how important our independent bottlers are to their communities.”
Ash said that there are more than 100 bottlers eligible for the Kendall Award, so it is a big deal for Atmore to make it to the final three.
“We have phenomenal employees who work hard, and they deserve this recognition,” she said.
Ash said that the video presentation is not scripted and all participants in the film are speaking from the heart. Filming was scheduled to continue through Sat., Aug. 15.
Ash also noted that a 12-person group from PepsiCo will visit Atmore today, Wed., Aug. 19, for a tour of the company’s headquarters. Included in that group will be Mario Mercurio, senior vice president and general manager of PAB’s Franchise Business Unit.
PepsiCo representatives said that the edited film presentation will only be broadcast during the national bottlers’ meeting and will not be made available for public viewing.