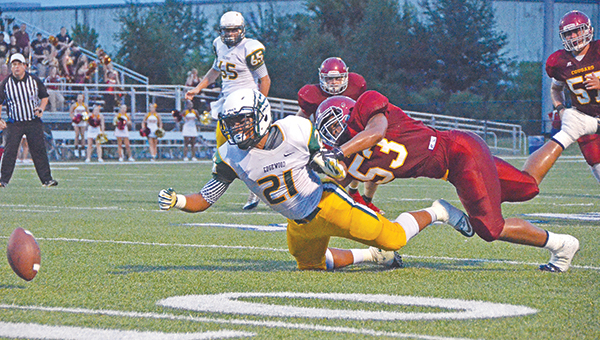 While Edgewood junior wide receiver Jackson Tate scored the game’s first touchdown — one of four touchdown passes in the first half from senior Nathan Rourke in his debut — with a sensational leap over Escambia’s Patrick McGhee in the first quarter and landed at the No. 1 play on SportsCenter’s Top 10 Plays Thursday, and others provided fireworks; the Cougars hung around, with the ‘Cats leading 26-21 entering the fourth.

“You think about the mistakes, we never could get going. That’s a sign of youth,” Wildcats head coach Bobby Carr said. “At the end of the day, we still found a way to win, and we can correct the mistakes we made. That’s why it’s tough playing a really good team like Escambia early because you know you’re going to make those mistakes.”

With 8:38 remaining, Rourke and company started on their own 32, marched off 56 yards and 2:50 on seven plays, before the Cougars stalled Edgewood’s drive at its own 12, forcing a turnover-on-down, still trailing 26-21.

“Our goal going into the game was keep it close and try to win the fourth quarter. That’s what we normally do,” Cougars head coach Hugh Fountain said. “We don’t find no solitude in coming close to anybody, we only come to play to win. We didn’t get the job done.”

In his first-ever football game, senior defensive end Kelvin Lucky, recovered Gumapac’s fumble. He finished the night with a sack, a tackle-for-loss and the recovery.

“He’s only going to get better. I can’t wait to see what he’s going to look like after week 5 or 6,” Carr said of the 6-foot-6, 230-pound Nigerian exchange student. “He got a little bit better in the second half, loosened up. The more he plays, the better he’s going to get.”

Tate’s touchdown wasn’t the only explosive play in the first half. Not to be outdone, Escambia senior Kris Brown ripped off a 59-yard touchdown run two plays later. Gumapac’s PAT gave his team its lone lead of the night, up 7-6, at the 9:36 mark in the first.

Brown would collect 120 yards rushing on 10 carries and two touchdowns, before exiting the game early in the third due to a head injury, but walked off on his own power.

“We were hurting in the second half because we lost Brown. He’s the best running back in the AISA in my opinion,” Fountain said. “And we lost our defensive tackle, Trey Lee, go to the hospital at halftime with dehydration. We don’t got no excuses, we’re next man up, next guys has to do the job.”

In the first half, Rourke threw for 180 yards and all four of his touchdown tosses.

“This is the first game, I felt like when I started cramping up in the third quarter, mentally that part of my game left,” Rourke said. “That’s why I made mistakes. I felt like this team really came together over the adversity. There’s stuff we’ve got to clean up, a lot of stuff I’ve got to work on personally. This team left it out here, I think.”

“I’ll tell you the type of kid he is, he had 40-something receptions as a sophomore and made All-State, and last year, he had eight and I never heard him complain one game,” Carr said. “He’s a great team player and that’s what it’s all about.”

Edgewood sophomore running back Tyler Price, also in his debut, rushed for 177 yards on 19 carries.

After allowing 21 points and 235 yards in the first half, the ‘Cats defense relinquished just 50 yards in the second half and forced two turnovers, including a third-quarter interception by senior safety Michael Taylor.

“Our defense bailed us out when they had to. They made some mistakes and didn’t play very good in the first half,” Carr said. “They stood tall when they needed to and shut them out in the second half.”

By Andrew Garner Editor If it wasn’t for her family and friends, Courtney English wouldn’t be where she is today.... read more