An answer to prayer 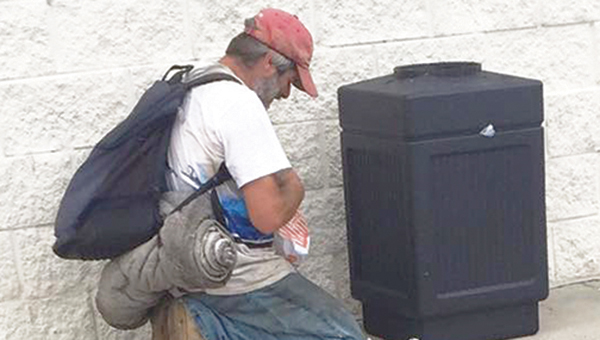 Shown is Steve rummaging through the garbage looking for food. |
Photo courtesy of John Brantley

A trip to Mobile to buy a wire for his car turned into a blessing that John Brantley will never forget.

Last Tuesday, Brantley left Best Buy off of Airport Boulevard and noticed a homeless man knelt over a garbage can rummaging through the trash looking for food.

“I noticed he was digging through the trash and taking out fast food bags and unrolling them to see if there were any left over food particles,” he said, adding that the homeless man was setting aside extra fries, hamburgers and sandwiches.

Sitting in his car not that far from the man, Brantley noticed that the homeless man was about to leave.

It was at that point, Brantley said something compelled him to ask the homeless man if he needed a hot meal.

“I had never seen a homeless person digging through the trash collecting food,” Brantley said. “It literally hurt me to see that.”

Brantley asked the homeless man whose name is Steve if he would like a hot meal. Steve said that would be very kind and followed Brantley to a nearby fast food restaurant.

“The only request he made is that he wanted a big ‘ol glass of sweet tea,” Brantley said.

Brantley, who is the principal at A.C. Moore Elementary School, asked Steve to tell him a little about himself.

“He told me his sister passed away a year ago, and that she died last September,” he said. “He lived with her and that made him homeless after she passed.

“I talked to him and told him God loved him. He was very cordial and very appreciative of what I had left.”

Brantley said he got a ways down the road and felt that he needed to come back to ask if Steve needed help.

“Something was like you need to go back and ask him if he needed some further help,” Brantley said.

Once Brantley asked Steve if he needed any more help, Steve said that Brantley had done enough.

“I said well what about a gift card from McDonalds?,” Brantley said. “He pretty much said he appreciated that and would be willing to take it. I told him to follow me across the road and I’ll get you one.”

Brantley told Steve that he just felt compelled to come back and ask him if he needed help.

“Steve said I prayed for a hot meal and God sent you,” Brantley said. “When he said that, it was like it hit me like a ton of bricks. I’m 38, and I’ve never once prayed for God to send me a hot meal. It’s just something I expected to get on a day-to-day basis. It made me realize how blessed I am.”

Brantley said before he left, Steve told him that he has cancer.

“He pulled up his shirt and right under his right rib cage was big mass protruding from his side,” Brantley said. “I tasked him ‘are you a Christian?’ He said he was. God can heal you. He said I know that.”

When Brantley returned home to Atmore, he couldn’t stop thinking about Steve.

He decided to post about his encounter with Steve on Facebook and included a picture of him rummaging through the trash can.

By the next day, it had already gotten some 8,000 shares.

Brantley has received many media requests for stories on his encounter with Steve, and through somebody from North Carolina that saw his post, a doctor has agreed to treat Steve’s cancer for free.

“The doctor said if you can find this man, I’ll treat him for free,” he said. “We have corresponded back and forth, and he had personally told me that he’s willing to treat him for free. Some things may have to be paid for.”

Last night, Brantley and three others with Crosspoint Baptist Church in Atmore, drove to Mobile in search for Steve.

Brantley said Steve may not be receptive to his coming and offer for treatment, but hopes the story ends well.

“Getting him treated would be the ultimate ending to the story,” he said.

Taste of the South a success