As weather changes, doves to be hunted 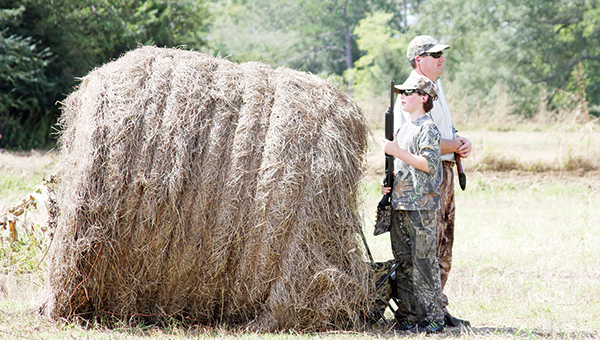 Parker Mock and his dad, Keith, face in opposite directions to ensure they are prepared for any dove’s flight path. | Submitted photo

When a change in the weather and the opening of a hunting season coincide, it can be a beautiful day for those of us who love the outdoors.

Such was the case last weekend for the opening of the dove season in the north zone, which encompasses most of the state.

As has been the tradition the last few years, I joined the folks at Gulf Farms near Orrville for the opening-day hunt. Mike Eubanks and crew put the emphasis on the youngsters who joined in the hunt, even calling the youth to the front of the crowd before the hunt started to hand out hats and express the importance of keeping our young people involved in hunting.

Like Eubanks, Chuck Sykes, Director of the Alabama Wildlife and Freshwater Fisheries (WFF) Division, also encourages the hunt providers to recruit as many young and new hunters as possible.

“For a lot of people it’s the only time they hunt during the year,” Sykes said. “They get together, and it’s more like a social event. It provides opportunities for people to get together and have fun. For Wildlife and Freshwater Fisheries, it is especially important for us. If those people aren’t invited on a dove hunt, they might not even buy a license that year. And, as we have pointed out recently, our operating budget comes from license sales. Not to mention the shotgun shells and shotguns and all the accessories. Having a successful dove season is huge for the department.”

Sykes, who grew up in wildlife-rich Choctaw County, said he can’t wait for the summer to end and dove season to arrive.

“For me, personally, I look forward to it every year,” he said. “You can sit and talk with your buddies, have lunch and listen to football games. If you kill birds, that’s great. It’s just the whole atmosphere. What I think about this time of year is dove season and football.

“I hunted Saturday and Sunday, and we had excellent hunts. On both hunts, there were kids running around, having fun. I know there was one kid who was probably 11 or 12 who killed his limit (15 birds). There were quite a few ladies and middle-aged men who were on their first hunts. It’s a good way to introduce people to hunting, because they don’t have to be quiet; they don’t have to be still. They get to see a lot of action. It can really get your blood pumping and get you into hunting.”

The south zone (Baldwin, Barbour, Coffee, Covington, Dale, Escambia, Geneva, Henry and Houston) opens at noon on Saturday, September 19. The daily bag limit for both zones is 15 birds per day with a possession limit of 45 after the third day of the season. The south zone’s first season ends on September 27. After opening day, shooting hours are one-half hour before sunrise to sunset. The second split in the south zone is from October 10 through October 25, followed by the final segment from November 12 through January 15.

The north zone (all counties other than the south zone counties mentioned above) has only two season segments. The first split runs through November 15. The final segment is open from December 5 through December 29. Visit www.outdooralabama.com for more information.

Ray Metzler, Assistant Chief of the WFF’s Wildlife Section, said the reason the south zone comes in earlier this year is because of the season length. The U.S. Fish and Wildlife Service determined that the dove population was in such good shape that additional hunting days were justified. Last year the season was limited to 70 days. For the 2015-2016 season, hunters get 90 days to pursue mourning and white-winged doves. Eurasian collared doves are considered an invasive species and do not count in the daily bag limit.

“Last year we had 70 days, and this year we have 90,” Metzler said. “With 20 extra days, we were able to open the south zone several weeks earlier. The people in the south zone like to hunt later in the year. The colder it gets, the more birds they get from the northern parts of the state and the eastern part of the country. So the later it gets, the more northern birds they get.”

The main reason the south zone has typically started later is because the weather is usually still hot in the middle of September. The hot weather puts a damper on the hunters, and it can be dangerous for retrievers that can overheat in a hurry.

Metzler said he hasn’t fielded a single call objecting to the early start of the season in the south zone.

“The key thing is they can start earlier if they want, but they can choose to wait,” he said. “The days are available. They can adjust their season to fit their weather and bird conditions.”

This year appears to be the exception with an early cool front that has everybody excited about the dove seasons. But, as Metzler warns, you don’t want too much of a good thing.

“We got a cool spell over the weekend, and it was quite enjoyable,” Metzler said. “The only problem is it can move some birds. If you’re sitting on a bunch of birds and you have a front push through, it may push your birds away. A hard front will definitely move some birds.”

As usual, Metzler said there were mixed reports in terms of dove numbers at private hunts and the WFF Youth Dove Hunts scattered around the state.

“I know we had a lot of birds in areas,” he said. “There were a lot of birds around the Autauga County Wildlife Management Area. I know two private landowners who had hunts near there, and they had real good hunts. Some of our youth hunts were good and some of them weren’t. I heard we had a real good hunt in Dallas County. I saw pictures of kids at the Chilton County hunt, and they killed several birds.”

Metzler said he is glad to see the Fish and Wildlife Service expand the opportunities for dove hunting because the birds have a high annual mortality rate regardless of hunting pressure.

“If they make it a year, they’re doing well,” he said. “That’s typical of most small animals with high reproductive rates. Most of them aren’t going to live but a year or two.”

Don’t forget that hunting and fishing licenses expire on August 31 each year, and remember to add the HIP (Harvest Information Program) certification to your hunting license if you plan to hunt any migratory bird species including doves and waterfowl. As part of the certification process, hunters are asked questions about their migratory game bird harvest from the previous hunting season.

I helped a lifetime license holder use his smartphone to go online and get his HIP certification just before the hunt started last weekend. The Outdoor Alabama smartphone app makes it easy to get the licenses you need. If you can’t get online or are unable to visit a retailer, call 1-888-848-6887 to obtain your hunting license and/or HIP certification.

Above all, keep hunter safety at the forefront of all your outdoor activities.

By David Rainer Alabama’s goose and youth waterfowl hunters will get increased opportunities for the 2015-2016 seasons, but mother nature... read more