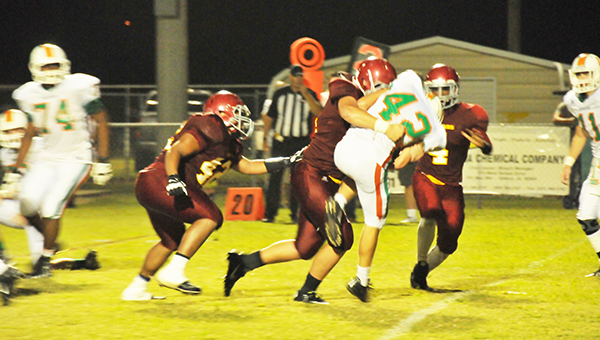 The Cougars committed seven penalties in the first half, but was aided by junior running back Kris Brown, who scored three touchdowns and gained 166 yards on the ground. Brown added 8 yards in the second half.

EA lead 21-0 at halftime, but could’ve lead by way more if it wasn’t for the penalties.

“We had a lot of penalties in that game,” Cougars head football coach Hugh Fountain said. “Seven in the first half. That hurt us having that many penalties. We’re not going to be able to do that and beat really good teams.”

Brown scored early in the first on a 49-yard dash, and the Cougars led 7-0 after Kainoa Gumapac’s extra point attempt. His second touchdown was from 11 yards in the second quarter with 8:45 left. With 2:40 to go in the half, Brown added his third and what ended up being his final TD from 4 yards out. Gumapac made all of his PAT’s in the first half.

Fountain said in the last two weeks, the Cougars have had seven touchdowns taken off the board because of penalties.

“That’s inexcusable,” he said. “That’s something we’re going to have to correct. It’s going to hurt us if we don’t.”

Despite the penalties, the Cougars’ (4-2) defense stepped up against a HA team that never really posed a threat in the shutout.

EA’s Trey Turner scampered in from 5 yards late in the third, and Gumapac scrambled in from 40 yards with 51.3 seconds before the fourth quarter for the 34-0 advantage. Gumapac’s fifth PAT try was blocked for a 4-of-5 night.

Next week, the sixth-ranked Cougars hit the road to play rival Monroe Academy in a big region match up.