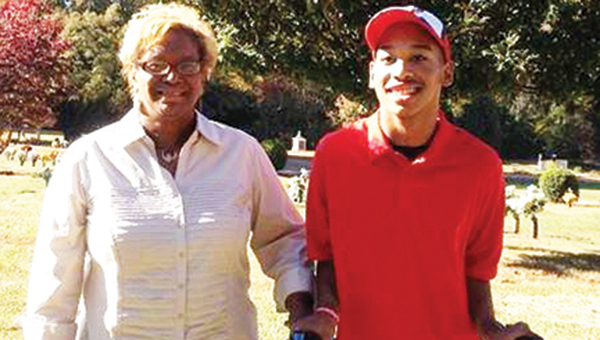 Adams’ daughter, Cherica while pregnant with Chancellor, was shot and killed by former Carolina Panthers wide receiver Rae Curruth on the night of Nov. 16, 1999. Doctors were able to save Chancellor, but Cherica died soon afterward. Chancellor is living with cerebral palsy, but has battled the odds and has won Special Olympics medals.

Because of the abusive relationship and the actions that were taken by Curruth, Saundra is making sure she lets other people know the message that domestic violence is serious.

She will be speaking at Escambia County High School on Fri., Oct. 30, from 7 p.m. until 9 p.m. during the Gulf Coast Bullying/Domestic Violence Awareness event.

Adams said her message to the young men in attendance will be clear.

“I’m basically going to be talking about the subtle signs of domestic violence, and speaking out to let someone know if you’re afraid or if you think you’re in a potentially violent relationship,” she said. “So many times people have a bad feeling, and they never share for fear of being dead.”

Adams said the signs of domestic violence are born from control.

“It all boils down to a controlling spirit,” she said. “They are trying to control you. All of them stem from the need to control.”

Domestic violence is an important issue for young men to hear because society is desensitized, Adams said.

“There’s so much of it that we take if for granted,” she said. “We need to take a passion for human life. We’re dealing with human lives.”

For quite some time now, the Charlotte, N.C. resident has been speaking on the issue of domestic violence.

Adams said toward the end of the year — during October, November and December — is when she’s the most busy.

“It’s every other week,” she said. “I’ve spoken three or four times this month. October, November and December are mostly my busy times because that was when my daughter was shot and killed.”

The May and June months are also busy for Adams because of Mother and Father’s Day.