‘It was a great day’ 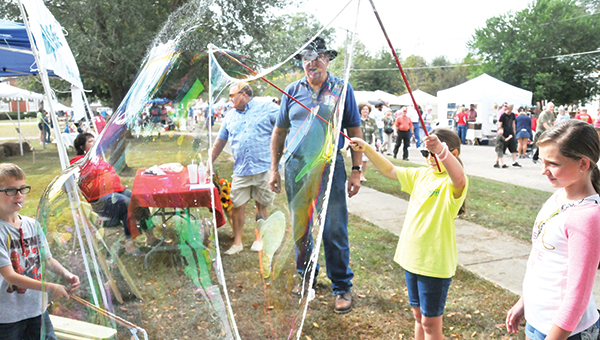 “I got a lot of good compliments,” Vickery said. “It was a great day.”

“The food vendors were very happy,” Vickery said. “Many of them sold out.”

Williams Station Day is an annual event held to celebrate Atmore’s name sake and the city’s heritage as a railroad stop. Before changing its name to Atmore, the city was called Williams Station.

For many, the festival is a good way to reconnect with old friends, Vickery said.

“A lot of people come to Williams Station Day who haven’t been here but once a year,” she said. “It was good to see former residents back.”

Vickery said it’s always hard to gauge how many people came to Williams Station Day, but she thinks somewhere between 11,000-12,000 people visited.

“A lot of people thought the crowd wasn’t heavy, but the show went longer,” she said. “They were bottle necked. A lot of people were up by the arts and crafts.”

Vickery said compared to last year, this year’s show was good because she saw many folks hugging necks, talking and enjoying the day.

Vickery said she heard a lot of positive things about the festival.

“I hear the great things, but I play on the things that can be changed,” she said. “I go back to the drawing board and see where we could’ve done better.

“It’s not so hard because I enjoy seeing people hugging and talking,” she said. “To me, no matter how tired I am, that’s what I feed off of, seeing people seeing each other for the first time and hugging. That’s what Williams Station Day has become, almost a reunion for people to come back.”

During the early part of the day, the color contest winners were announced. The winners are as follows by school:

The winners of the pumpkin decorating contest are the following:

A party in the park was held Sunday for Pepsi Atmore for being nominated as one of the top bottlers... read more