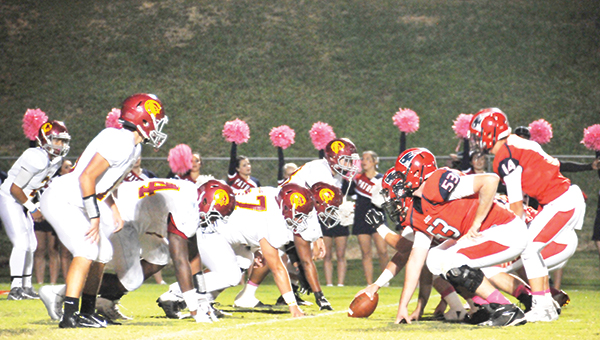 Escambia Academy’s defensive line has been a positive force for the Cougars this season. EA visits Lee-Scott for in a playoff game Friday night. | Andrew Garner/Atmore Advance

Escambia Academy’s defense will be meeting one of its biggest challenges this week as the Cougars visit Lee-Scott Academy in a playoff game on Friday night.

LSA averages 40.6 points per game on offense, compared to EA’s 14.3 points given up per game.

The biggest strength this year for the Cougars is their defensive line, EA defensive coordinator John Gartman said.

“Our defensive line has really stepped up,” Gartman said. “We’ve got three really good guys there. Only one of them is a returning starter, Trae Lee. He’s a junior and three-year starter for us. H.T. Fountain hasn’t played much defense, but he’s started this year and done a good job for us. Geo Little, he wasn’t here last year, but we’ve been really pleased with him.”

Along with the strong defensive front, the Cougars’ secondary is solid with speedster Kris Brown, Patrick McGee and Fred Flavors leading the pack.

In between the line and the secondary are linebackers Josh Fields and Bradley Campbell.

Fields said Gartman has really helped the defense get ready for games because he shows them opposing teams’ formations and what plays are run out of them.

“At the begging of teach week, he breaks down each formation and what they like to run out of that formation,” Fields said. “I think that really helps us. We know what play they’re running better than what they know they’re doing. We are expecting based on what the formation is and who to key on.”

Campbell said the defense usually spends about an hour every day in the film room.

“Then, we have our Hudl accounts, where we go online,” Campbell said.

Hudl is an online account tool that allows football players to see their highlights during the season, along with other teams’ offenses and defenses.

“Hudl has helped a lot,” Campbell said. “It’s helped us break down certain offenses and determine a good game plan.”

So far this season, the most any opponent has scored on the Cougars has been 41 by Monroe Academy.

Fields and Campbell said the credit for the low touchdown rate by opponents goes to Gartman.

“We’ve done a pretty good job of keeping the scores pretty low,” Campbell said. “We like to credit that to coach Gartman. Compared to last year, we have a lot faster defense. It’s a lot more high octane, and it lets us get to the ball faster.”

Escambia Academy’s defense will be facing a similar running back in Mitchell Lewis, who is like Cougar stand out Kris Brown.

Fields said practicing against Brown gets the team ready for just about anything.

“We’re basically practicing against probably the best running back in the state,” he said.

“Playing against him has definitely prepared us to play against any team this year,” Campbell added.

Campbell said the key to tackling Lewis is focusing on him and making sure the defense does its job in getting him down, locking on and never letting go.

Kick off Friday night is at 7 in Auburn.

Seventh-ranked Escambia Academy is facing a quality opponent in Lee-Scott Academy on Friday night in the quarterfinals of the AISA... read more