AUBURN – Escambia Academy put up a good fight against Lee-Scott Academy earlier tonight, but the Warriors prevailed to win 35-24 in the quarterfinals of the AISA Class 3A state playoffs.

The Cougars and Warriors played a close first half, abd traded scores in the second half before LSA took a lead it would never give up.

LSA drew first blood after only two plays when stout running back Mitchell Lewis ran the ball 62 yards on a sweep play with 11:23 left in the first quarter. Lewis finished the game with five touchdowns on the night.

After recovering a Lewis fumble and on the next EA offensive possession, Cougars running back Kris Brown made LSA pay with a 95-yard run for a touchdown with 10:02 left in the first half.

Lewis scored his second touchdown with 6:55 left in the first half, and the Warriors took a 14-12 lead into the break.

Right out of the gate, the Cougars came out scoring on a 67-yard dash from Turnerto take back the lead with 9:35 left in the third quarter. EA led 18-14.

After trading possessions and EA getting things rolling on defense, the Warriors found running room on a 21-yard TD rush from Lewis. With the extra point, the Warriors took a 21-18 lead.

However, EA answered back.

Gumapac found Pat McGhee for a 53-yard strike on the first play from the line of scrimmage to put the game back in the Cougars’ court.

The Cougars were able to hold Lewis on a fourth-and-two play to start the fourth quarter, but their offense couldn’t get anything going, deciding to punt with the down at fourth-and-three.

LSA then took its lead it would never give up on a 48-yard running score with 8:33 left in the game.

LSA scored its final touchdown of the night after putting together a more-than 5-minute drive to go ahead 35-24 with 47.6 seconds left.

With the ball and 39.9 seconds left in the game, the Cougars tried everything they could getting down to the Warrior 37-yard line, but didn’t get the ball in the end zone. 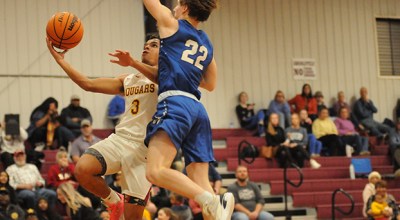 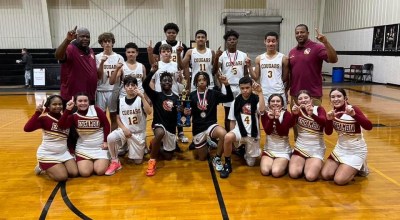