3 entities can be used to develop plan 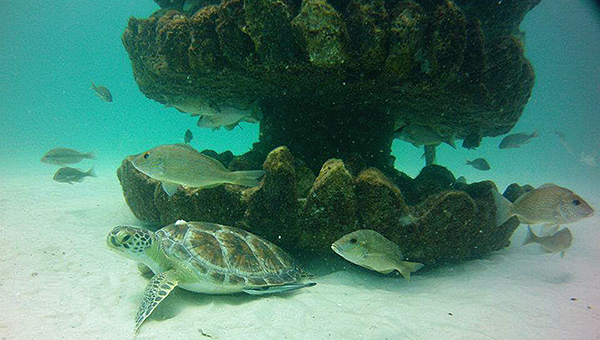 Pyramid reefs of different sizes will be used in the artificial reef enhancement program funded by the National Fish and Wildlife Foundation. Nearshore reefs will use different configurations to benefit the saltwater ecosystem along the Alabama Gulf Coast. | Submitted photo

A brainstorming session involving the Alabama Marine Resources Division, Alabama Wildlife Federation (AWF) and the Alabama Chapter of the Coastal Conservation Association (CCA) resulted in significant implications for those who love to fish in Alabama’s saltwater environment.

The three entities concluded that their combined efforts could best be used to develop a long-term plan for Alabama’s world-renowned artificial reef program.

Those oil-spill related dollars that Gothard noted come in the form of grants recently announced by the National Fish and Wildlife Foundation (NFWF) that will provide $12.5 million for habitat enhancement along the Alabama Gulf Coast. NFWF’s three-year plan is phase one of a larger 10-year artificial reef program that Marine Resources developed in conjunction with the AWF and CCA-Alabama. Visit www.alreefs.com for more information.

“We designed a 10-year plan with $42 million in projects,” Marine Resources Director Chris Blankenship said. “This NFWF project gives a good start on that 10-year plan. We’ll continue to look for funding after the first three years. We’re hoping to use the research component of this project to show the benefits of artificial reefs, that it produces fish and leads to a positive net ecological benefit that will help us seek additional funding down the road.”

The NFWF funding will be used for a variety of projects in three areas: offshore, nearshore and inshore.

“Starting with offshore, it includes money to sink two ships, one in 2017 and one in 2018,” Blankenship said. “It also includes funding to put down 140 of the 25-foot tall pyramids. We will put down a couple of those larger pyramids at each site to mimic a larger vessel. We plan to put about 600 regular pyramids in the reef zones we’re creating in the Gulf of Mexico within 9 miles of the shoreline. We are still working to have this area permitted by the Corps of Engineers.”

The U.S. Army Corps of Engineers now requires cultural resource surveys to search for any shipwrecks or other historically significant bottom features.

“The level of surveys required by the Corps of Engineers is very costly,” he said. “The surveys include side-scan, sub-bottom profiles and magnetometer surveys that look for metal in shipwrecks and other material. That has been the hold-up. This should help us do those surveys and get those reef zone permits processed and moving forward rapidly.”

Included in those nearshore plans is a proposed juvenile fish habitat zone of about 40 acres south of Sand Island Lighthouse. The area would provide a haven for juvenile fish to escape predation.

“We would use low-relief material, like rocks from basketball size to softball size,” Blankenship said. “This would give those red snapper from age zero and age one some cover during that transitional period before they recruit to the larger reefs. Hopefully that will help get those age zeros some protection and increase the recruitment.”

Another project involves the nearshore Minton Reef Zones south of Gulf State Park Pier and south of Perdido Pass, which will get more of the 6-foot pyramids and “eco-reefs” designed to be deployed in areas with soft bottoms.

Blankenship said the inshore plans include replenishing about 10 existing reefs with new material.

“A lot of those reefs that were built 15 or 20 years ago have settled or have silted in, and they are in need of new material,” he said. “We also plan to build at least two new reefs. One will be a fairly large reef off Point Clear that is a relic oyster reef. We haven’t decided on the other reefs, but we’re looking at areas in Mississippi Sound that would be suitable. We’re looking for places with harder bottoms. If we don’t find suitable hard bottom, we’re experimenting with the eco-reefs that won’t sink up. If those turn out to be beneficial, it really opens up the opportunities to use eco-reefs in areas where we previously couldn’t build reefs because the bottom was too soft.”

Blankenship said the eco-reefs use a piling surrounded by limestone rock. Discs are attached around the piling at varying depths to provide cover for juvenile fish and other sea life. Depending on water depth, Blankenship said from three to five discs could be attached to the piling.

“The eco-reefs have proven to be effective in the Minton Reef Zone, so now we’re looking to see if they are effective in waters like Mississippi Sound and Mobile Bay,” he said.

As for the ships that will be deployed as artificial reefs in 2017 and 2018, Blankenship said vessels similar to The LuLu, a 271-foot retired coastal freighter that was sunk 17 miles south of Perdido Pass in 2013, would be ideal.

“We’ll have to see what kind of vessels are on the market,” he said. “We’ll be looking for something between 200 and 300 feet. We hope we can find something like The Lulu that will last for decades or like the Liberty ships that were sunk in the 70s and are still providing habitat for a variety of reef fish.”

“As we get pipe or culvert or other material donated from construction sites, we will have money available to deploy that material as reefs,” he said. “We want to encourage companies or individuals who have these types of material to contact us (251-968-7576 or 251-861-2882) so we can stage that material at our facility in Gulf Shores and deploy the reef material both inshore and offshore.”

Blankenship said Marine Resources would contract with the University of South Alabama Marine Sciences to perform much of the research work funded through the NFWF grants. One of the research projects involves comparing the change in biomass for areas after adding artificial reefs to natural bottom without any structure.

“We’ll have the opportunity to do some studies on areas that have no reefs at all,” he said. “We’ll do a pre-deployment survey and then monitor the new reefs that were deployed over the course of three years to see how the biomass grows around those reefs. We think we will be able to provide definitive information that artificial reefs increase biomass and have a net positive ecological effect.

“We’re excited to partner with the National Fish and Wildlife Foundation in this extremely important project. I’m very thankful that Governor Bentley and Commissioner (N. Gunter) Guy saw the benefit in this type of work and provided the funding.”

Vernon is a nice place to watch a game

Turning off of I-10, I knew I was head into unknown territory. Last Friday night, the Northview Chiefs visited Vernon... read more