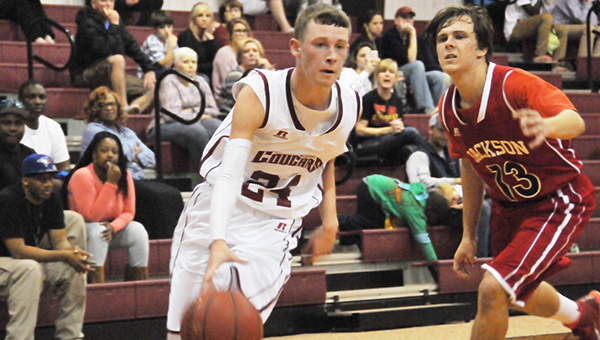 Escambia Academy put together a potent defense in the third period as the Cougars beat Jackson Academy 68-44 in regular season action last night.

Utilizing a press game and half-court trap, EA had its way with JA, who played closed in the first half and led 23-20 at the break.

The second half, as a whole, was a good one for Canoe school. The Cougars scored 24 points each in the third and fourth periods.

“We played a good second half,” EA boys basketball coach Hugh Fountain said. “They hurt us in the first. We pressed and made them turn the ball over more (in the second half).”

In the second half, Fountain said the boys started playing their game.

Blake Allen, who had his way with the basket, led the Cougars with 24 points. Tyler Sells scored nine of his 10 points in the second half.

Sells and Allen found each other after key steals at the half court.

Allen nailed a 3-pointer to give EA a 32-27 lead in the third period. Earlier in the period, Sells got a steal and converted on the other end to give the Cougars their second lead of the game.

Allen got a nice finish and Tre Turner put in a trey to help EA pull away 44-31 at the end of the third.

While EA cruised through the second half, Jackson Academy’s Anferney Trotter put on a show for the crowd. He led JA with 18 points.

Trotter found the basket on fade away jumpers midway through the first period and later got a power slam in the second to give his team a 15-11 lead.

Turner chipped in nine points for EA; and Bradley Geck and Fred Flavors had six points each.