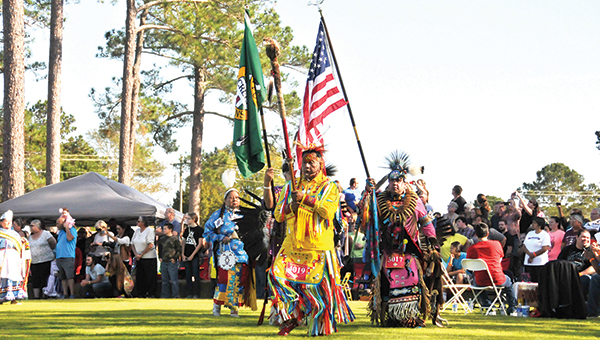 The Poarch Creek Indian and United States flags are brought out, along with the Eagle Staff during the grand entry Thursday at the 45th annual Thanksgiving Pow Wow. | Andrew Garner/Atmore Advance

The event, which took place on Nov. 26-27, brought together Native Americans from around the country.

“We experienced a record breaking crowd at this year’s Pow Wow, an event that started out as a homecoming for my people,” Poarch Creek Indians Tribal Chair and CEO Stephanie Bryan said. “It takes a lot of coordinated effort to produce an event of this magnitude, and I am extremely proud of all the hard work and dedication of everyone involved. This year’s Pow Wow held extra special meaning as we have had to say goodbye to two very important people to our Tribe and the community, my uncle John Arthur “The Corn Man” McGhee and Dr. J. Anthony Paredes.

“If anyone has been to our Pow Wow and had some of our “famous” Indian Roasted Corn, they more than likely met or knew John Arthur McGhee,” she said. “He left us all too soon right before Thanksgiving, and was a proud member of the Poarch Band of Creek Indians. We were so glad to have as a special guest at the Pow Wow this year Ms. Alleen Parades, wife of the late Dr. J. Anthony Paredes. Dr. Paredes played a pertinent role in helping us obtain our federal recognition. This year’s Pow Wow was certainly a success, and is always a great time of good food and good fellowship with family and friends.”

To open the event, the Oklahoma Creek Stomp Dancers stomped their way around the mound, and then were followed by the Poarch Creek Pow Wow Club.

The opening ceremonies included the national anthem, a welcome from Tribal Chair Stephanie Bryan, a language presentation from the Fred L. McGhee Early Learning Center and the Princess Contest.

Once the princess contest concluded, the massive crowd made its way to the Pow Wow Arena, where the grand entry was held.

Following the grand entry, which highlighted the many different tribes and their dance contestants, the intertribal dance competition began.

The winners of the competition were not available when the Advance went to press Tuesday night. Look for a complete list of the winners on our website at www.atmoreadvance.com.

Zion Star African Methodist Episcopal Church in Atmore served 182 plates of food and gave away clothing to those in... read more