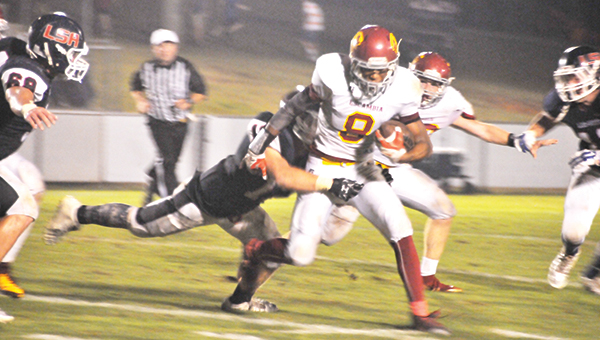 Escambia Academy’s expectation this season was simple — to play in the state championship.

However, the Cougars didn’t do so, finishing the season with a 7-5 mark and in the quarterfinals of the AISA Class 3A state playoffs.

This was the fifth straight season that the Cougars finished with a winning record. In 2010, EA finished 4-7 while in Class 2A.

EA head football coach Hugh Fountain said the season overall was built around getting back to the title game.

“As far as our expectation as the team and the boys, especially, our expectation was to go and play in the state championship game since we had won it last year,” Fountain said. “We were disappointed that we didn’t do it.”

After losing its first two games of the season, EA bounced back with wins over Lancaster Christian, Tenn., Fort Dale Academy, Crenshaw Christian Academy and Hooper Academy. On Oct. 2, the Cougars fell 41-12 at Monroe Academy before defeating Morgan Academy, Pike Liberal Arts and Glenwood in a three-game win streak.

To end the regular season, EA fell 20-8 to Bessemer Academy, and then would fall 35-24 to Lee-Scott in the playoffs.

Fountain said throughout his many years of coaching, he knows that every season has its own identity.

“When it was all said and done, there were many big moments in the season,” he said. “At the time of our loss to Lee-Scott, you don’t realize that they were big moments. As a team, we wanted an opportunity to defend our title, and didn’t do so.”

Fountain said all five of the losses were to quality teams, three of which — Bessemer, Edgewood and Monroe — played in the state championship game.

The biggest moment for the Cougars this season was making the playoffs for the fourth straight year, Fountain said.

“I don’t think that’s ever been done in school history,” he said. “Especially considering our schedule was a monster schedule.

“With us making the playoffs was big for our season, particularly as a young team,” he said.

Throughout a season of ups and downs, one of the big ups was winning at Pike Liberal Arts in Troy, the coach said.

Fountain said the game against Pike Lib was a must win because if the Cougars lost, then they’d be out of the playoffs.

“It was a good, solid victory,” he said. “The boys played well on defense and offense.”

If there was one phase of the game that EA improved on as the season went along, it was defense, Fountain said.

“All year, defensively, we got better,” Fountain said. “The Lee-Scott game was not our crowing moment, but the other games leading up to it were.”

On offense, the Cougars some 99 percent of the personnel returning next season, Fountain said.

“It’s exciting to know we got that coming back,” he said. “We just got to continue to work hard in the offseason.”