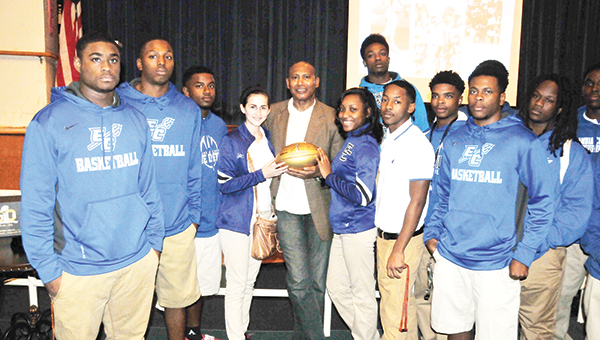 McNeal — then a defensive back for the Miami Dolphins — and his team were playing the Washington Redskins, in Pasadena, Calif., on Jan. 30, 1983. Redskins running back John Riggins broke through the Dolphins’ red zone defense for a touchdown and a lead the Washington team would never give up.

In front of a large student crowd at Escambia County High School, McNeal said on Monday that stuff like the missed tackle happens, and it’s what you learn from it that matters.

“I’m happy and so glad to be here today,” he said. “The key to everything in life are you guys.”

To help mark Super Bowl L on Feb. 7, 2016, the NFL is celebrating players and coaches of the past 49 Super Bowls, their high schools and communities that have impacted the game. During the season, nearly 3,000 players and head coaches, and more than 2,000 high schools, will be recognized.

As a member of this special group, ECHS was sent a golden football because McNeal was a former player who was on an active roster in a Super Bowl. In his case, he played during Super Bowls XVII and XIX.

The golden football will be on display at the school in a handmade trophy case.

While at ECHS, McNeal played two years of football as a wide receiver and defensive back.

After graduating from ECHS in 1976, McNeal went to the University of Alabama, where he played for legendary coach Paul “Bear” Bryant.

While at UA, McNeal and the Crimson Tide won national championships in 1978 and 1979.

He said he had a great time playing under Bryant.

“His philosophy was always show your class,” McNeal said. “He told me ‘wherever you go, whatever you do, do that, and everything will turn out OK.’ He was a classy individual. He always wanted you to do your best.”

“When he’s yelling at the players, he’s trying to help them,” he said about Saban. “That’s what coach Bryant was like. He wanted to try and help everybody.”

McNeal went on to play 10 seasons for the Miami Dolphins under head coach Don Shula.

McNeal said playing in the NFL was quite different than playing in college.

“Everything is faster,” he said. “You have to be a little meaner, a little cockier. You‘ve got to know who to mess with and who to not mess with.”

Additionally, McNeal got the chance to play with Dolphins’ legend Dan Marino, who is a good friend of his.

“He was a great guy,” McNeal said about Marino. “I enjoyed him. I got to know him. I know his wife, his family. I really liked Dan Marino.”

The one aspect about the game of football he liked the most was building relationships with other players, McNeal said.

“I got to know them as individuals,” he said. “Some of those individuals became friends. My best friend today is (former Dolphins defensive end) Curits McGriff and also Dan Marino and (former Dolphins kicker) Tony Franklin. You can get to know those people. They’ll tell you what you’re doing wrong and they’ll tell you what you’re doing right. I like that.”

McNeal, who lives in Miami, Fla., has a wife, Rhonda, and a daughter, Jessica.

The Poarch Creek Indian and United States flags are brought out, along with the Eagle Staff during the grand entry... read more