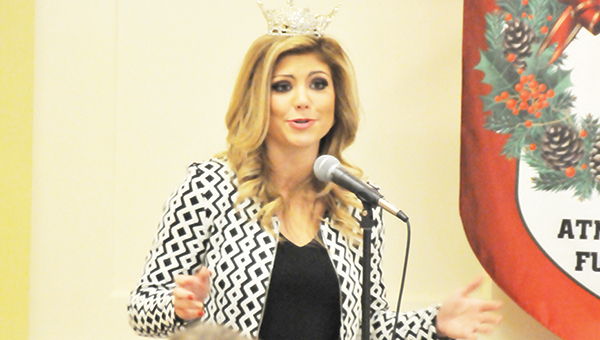 At 4 years old, Meg McGuffin remembers wanting to walk down the runway as a contestant in a big pageant.

The Ozark native got that chance recently while competing at Miss America 2016, where she finished fourth runner up.

McGuffin, who was also crowned as Miss Alabama 2015, was the guest speaker at the Atmore Rotary Club’s weekly meeting Tuesday at First United Methodist Church.

“Having the opportunity to spend two weeks with 51 other women who are talented, smart and want to change the world was absolutely inspiring,” she said.

Performing on stage is nothing new for McGuffin.

While competing at the Miss America pageant, McGuffin made a remark about Republican Presidential Candidate Donald Trump, saying that he is an entertainer and that Republicans should be terrified by the possibility of having him as President of the United States.

She said she thought she nailed her answer, but soon found out the next day that it had made national headlines.

At 11, she performed on Broadway, seven years after her start at dancing.

As a result of her accomplishment as a teenager, she won full rides to the University of Alabama, Troy University and Auburn University. And throughout her years of competition, she’s won $70,000 in scholarships.

“It was life changing to me at 14 to have the opportunity to go to college for free,” she said.

Through her title as Miss Alabama, McGuffin travels around the state for speaking arrangements.

Her platform, “Healthy is The New Skinny” as Miss Alabama, helps promote positive body images for women. She served as the president of the Auburn University Body Image Education and Eating Disorder Awareness. Through the awareness campaign, she spearheaded events to help students at Auburn, namely the Southern Smash, Love The Skin You’re In, Fat Talk-Free Week and Love Your Body Week.

“I saw Auburn become more of a body conscious campus,” she said.

This week, she’ll be in town for the Twilight Christmas Parade in Atmore.

She lives in Birmingham and is studying for her master’s degree in administration in higher education.