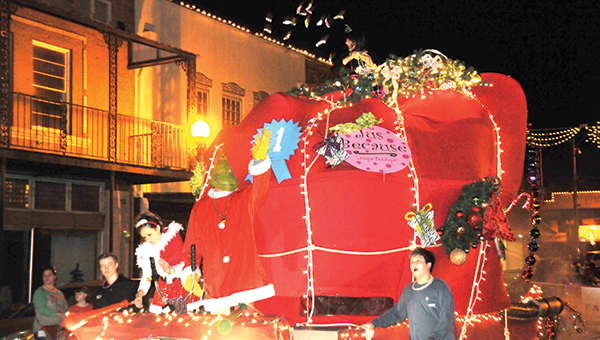 “It was a wonderful parade,” she said. “It went accident free, and there were no problems at all. People were happy and out there. The crowd was amazing.”

Vickery said there were some 65 units that participated in the parade.

“We went passed I would say almost one or two blocks compared to last year,” she said.

Vickery said the parade stayed at a pretty steady pace as it lasted around 30 minutes.

Once the parade ended, the floats parked at Escambia County High School, where the winners of the float competition were announced.

The reaction from folks on the parade has been nothing but positive, Vickery said.

“The only thing negative was the pushing and shoving for the candy,” she said. “That’s the typical at a parade. If a piece of candy gets thrown at you, people are going to fight for it.”

With so many people coming to Atmore for the parade, a lot of money was spent here, Vickery said, adding that a lot of eateries were full after the parade concluded.

Vickery said the parade was the perfect ending to Atmore’s Christmas events.

“All of the Christmas events in Atmore were truly successful,” she said. “Everything that went on the last two weeks, from Santa in the Park to the parade, the community came out and supported what we did. We do appreciate it.”