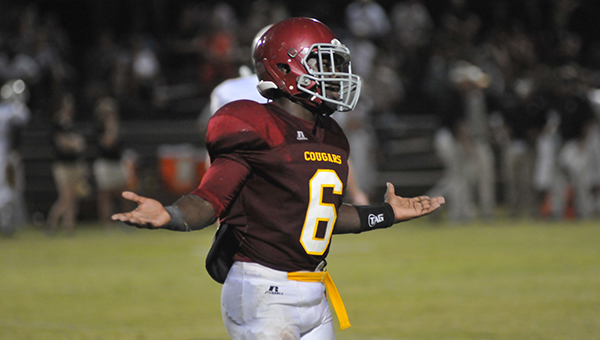 Escambia Academy running back Kris Brown has been selected as the Atmore Advance’s 2015 Offensive Player of the Year.

Brown, who also earned a spot on the Escambia County All-County team, rushed for 1,569 yards on 141 carries and scored 26 touchdowns to help lead the Cougars this season.

Brown said the offensive line, fans and family kept him going and led to his success this year.

“My line helped me a lot,” he said. “The fans and inspiration kept me going on the team, from my dad (Christopher) and my two brothers (Patrick McGee) and (Kharles Brown).”

Brown averaged more than 11 yards per carry this season, and could pile up some 200 yards per game on any given night.

Brown utilized his speed and agility to slice through defenses as he found green pasture on many occasions.

His father engrained his agility and knowledge at his position into him, Brown said.

“He played football at Bay Minette,” Brown said. “He showed me his techniques, and I appreciate him showing me those skills. I feel like I can feed off of my skills. There’s always room for improvement.”

He said the turning point this season came after the Cougars lost their first two games.

“After that, everybody wanted to pick it up,” Brown said. “You had to encourage everybody to keep their heads up and keep fighting throughout the season because we were fighting for a playoff spot. Everybody kept trying to look ahead.”

While he didn’t make his goal of 2,000 yards this season, the junior said he’s going to hit that mark next year.

Brown is the son of Christopher Brown of Atmore, and Tamekia Brown of Detroit.