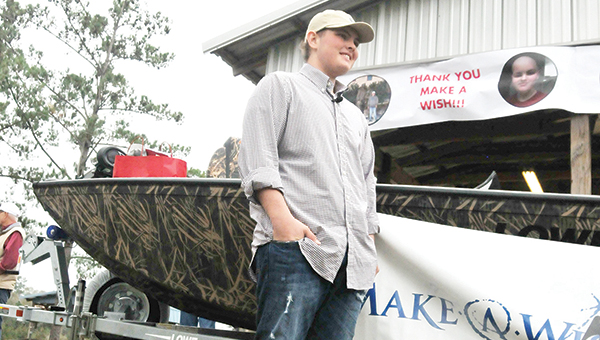 Denver Shuttlesworth talks with the media next to his new boat. | Andrew Garner/Atmore Advance

Denver Shuttlesworth had no idea what was coming.

Shuttlesworth was surprised Monday afternoon with a brand new Stinger 175 bass boat from the Alabama chapter of the Make-A-Wish Foundation.

A big group of family and friends gathered at Magnolia Branch Wildlife Reserve to celebrate the occasion.

Shuttlesworth, 17, who is suffering from neuroblastoma, was led to believe that he was there for a photo shoot. Even one of his family friends took pictures to keep him distracted.

“It was shocking,” he said about the day itself. “It’s very heart touching to me.”

Neuroblastoma is a cancer that develops from immature nerve cells found in several areas of the body, according to the Mayo Clinic. It most commonly arises in and around the adrenal glands, having similar origins to nerve cells that sit atop the kidneys. Additionally, the cancer can develop around the abdomen and in the chest, neck and near the spine.

“We went to the ER with lower back pain, and the doctor was thinking that he had kidney stones, and then on the CT scan at the ER, they saw that he had a tumor resting on his spine,” Shuttlesworth’s mother, Sandy Hollinger said.

Hollinger said Shuttlesworth was transported via ambulance to USA Children’s and Women’s Hospital in Mobile.

Shuttleworth was diagnosed on Jan. 11, 2014, a week after going to the emergency room with back pain.

“We’ve been able to be at home in the last five months taking oral chemo,” she said. “We were there (at St. Jude’s) for almost a year-and-a-half.”

Hollinger said Shuttlesworth isn’t in remission, but goes back in January to have some scans done.

The Make-A-Wish Foundation came into the picture when Shuttlesworth’s social worker put him in touch with the state chapter.

Make-A-Wish is a national foundation that grants wishes to children who are suffering from a life-threatening medial condition. In the United States and its territories, on average, a wish is granted every 37 minutes.

“He asked for a boat,” Hollinger said.

While Hollinger said a few words of thanks, tears started streaming down her son’s and everyone else’s faces.

The avid outdoorsman and junior at J.U. Blacksher High School, said he plans on taking the boat out as soon as possible. The boat came from L and M Marina of Stapleton.

When asked what’s kept him going since his diagnosis, Shuttlesworth said family, friends and most importantly, God, has been a big help.

Alabama Make-A-Wish President and CEO Pam Jones said the foundation wanted to make the wish granting a memorable one for Shuttlesworth.

“We wanted to make this wish experience he and his family would always remember,” Jones said.

The Grinch on Jus Because’s float throws candy out to the large crowd that attended the annual Twilight Christmas Parade... read more