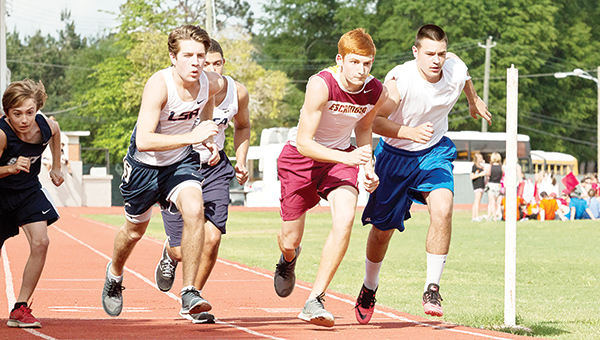 Escambia Academy’s track and field team claimed the No. 1 spot in the top 10 sports moments of 2015. | File Photo

2. EA claims lifting title — The Cougars won the AISA Class 3A state weighlifting title for the third year in a row in February. EA also compiled the highest score at the tournament.

7. Chiefs state bound for 1st time — The Northview High School baseball team advanced to its first ever state tournament appearance in May.

8. ECHS girls play at regionals — The Escambia County High School volleyball team advanced to the Class 5A South Super Regional in Montgomery in October, a year removed from making it to the state tournament for the first time in school history.

9. EA, NHS make playoffs — Escambia Academy and Northview’s football teams made appearances in the 2015 postseason. The Cougars fell in the AISA Class 3A state quarterfinals. Northview fell in a tight game in the Class 1A regional semifinal.

10. ECHS brims with pride — Escambia County High School’s baseball cap took first place in a statewide readers’ poll in a competition in May. The Blue Devils’ cap won over 50 other submissions, and was named the top winner out of a pool of 10.