Bama, Clemson to square off in National Title game 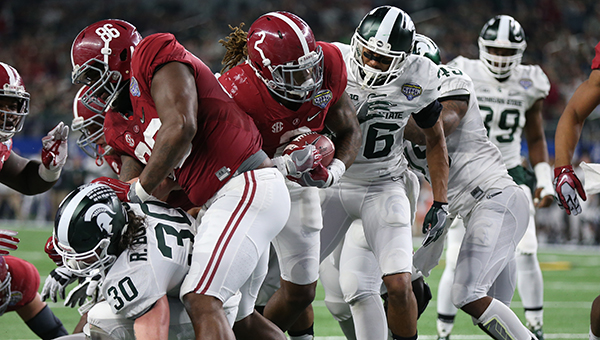 Alabama’s Derrick Henry (2) rusns through for a gain Thursday during the semifinals. | University of Alabama Athletics

The College Football Playoff National Championship Game has been set as both heavyweights are set to square off on Monday night in Glendale, Ariz.

Alabama decapitated Michigan State 38-0 in the semifinals of the playoffs after Clemson beat Oklahoma 37-17.

On the field, the Crimson Tide’s defense stands out over most teams. Alabama, on average, allows 14.4 points per game and 258.2 yards per game.

Linebacker Reggie Ragland leads the Tide with 97 tackles on the season. Reuben Foster comes in second with 64 tackles.

For Clemson, B.J. Goodson has wracked up 98 tackles, and T.J. Green has accumulated 84 this season. Ben Boulware has a respectable 79.

Other than the linebackers, the Crimson Tide’s defensive front will be battling a tested Clemson offensive line.

On the offensive front, the Tigers have Heisman Trophy Finalist Deshaun Watson at quarterback.

Watson has thrown for more than 3,500 yards, 30 touchdowns and 11 interceptions this season.

The power horse for the Crimson Tide has been running back Derrick Henry. Henry, the Heisman Trophy winner, has rushed for 1,986 yards on 339 carries and 23 touchdowns.

Calvin Ridley for Alabama and Artavis Scott for Clemson will be the favorite targets for their quarterbacks in the game.

Alabama is the only team entering the contest with a blemish on its record. Clemson is sitting pretty at 14-0.

Alabama has battled back throughout the season to get the right to play for the National Championship again as it chases its 16th.

The game will be broadcast on ESPN and kick off is slated for 7:30 p.m. CST.