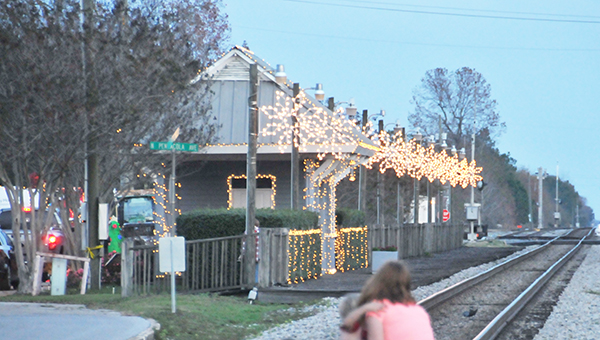 The city of Atmore took its first big step toward getting the AMTRAK train service back to the city. An inspection train will roll through the city on Feb. 18, and will make a stop at 3:55 p.m. | Andrew Garner/Atmore Advance

Like the astronauts walking on the moon, the city of Atmore recently took its first big step toward returning the AMTRAK train service to the official rail welcome center for the state of Alabama.

Jerry Gehman, Atmore’s representative to the Southern Rail Commission (SRC), said Thursday that an inspection train will arrive in Atmore on Feb. 18, at 3:55 p.m.

“This is a huge and important step,” Gehman said.

Gehman said the inspection train is critical for the city because politicians are going to be in the carriage along for the ride, and it will help garner influence for funding to bring the service back.

“We want to put our best foot forward, and make the public aware, and get involvement from community,” he said. “The city is moving forward with plans to facilitate the one-day train.”

Gehman said the city is temporarily putting plywood on the platform at the station and sprucing up downtown with flags to make Atmore look more Americana.

Some 11 years ago, Hurricane Katrina brought to an end the train service from east of New Orleans, La.

Gehman said AMTRAK has extended the city of New Orleans’ train service, and it now runs from NOLA to Chicago on a daily basis, adding that if the service were to return to Atmore, it would reactivate the east route.

In order to return the train service, there are three options, which have Atmore included, that are under consideration, Gehman said.

Gehman said there is an alternate option that has a charter bus going from Mobile to Jacksonville.

The third option is a combination of the first two options to run daily from Mobile to New Orleans, and from New Orleans to Orlando.

“The more options you have, the more service and expense you’re going to have,” Gehman said.

Because the SRC is composed of Alabama, Mississippi and Louisiana, it would need support from all three, including Florida and Texas, to help bring back the service, Gehman said.

Last December, AMTRAK visited Atmore following a study that was released saying that the city is capable of having the train service here.

Gehman said one of the three options would need to be funded if it were to occur.

“This may or may not occur, but the inspection train will,” he said. “The politicians will detrain and have a press conference at Wind Creek Atmore.”

If the service were to return to Atmore, then the city will have to wait 24 months before trains make stops, Gehman said.

Glenn Carlee (left) is shown here as the Atmore police chief with his father, Joe, who served as an auxiliary... read more