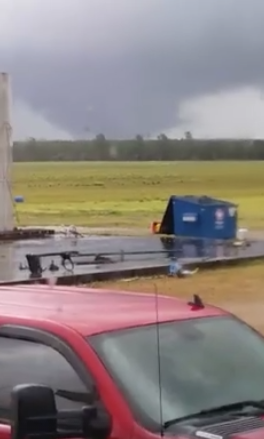 Lori Diller has been through a whirlwind since she uploaded a video of a tornado on Facebook Monday afternoon.

Diller’s 2 minute, 38-second clip captured not only one of the tornados that ravaged the Century, Fla. area, but it also recorded something the Walnut Hill resident will never forget.

Diller said she doesn’t remember when she saw the tornado, but knew something was brewing when her weather alert went off on her phone.

“We were looking out the windows trying to see anything,” Diller said. “We just saw a crazy amount of winds blowing from west to east. Our house faces west. We had a big sliding glass door, and I just decided to pick up my phone and film it.

“Sure enough, it kind of formed and went away, and then formed the big major one,” she said. “I guess that’s the one that hit Century.”

It was soon after that moment that Diller’s 6-year-old son, Logan, asked whether that’s a tornado or not.

“He just said, ‘oh God, please don’t let the tornado come toward us. Let it go away from us,’” Diller said. “We all said, ‘Amen,’ and then saw the major one come down.”

“He said, ‘we need to pray for the other people it’s headed toward,’” she said.

Since Diller uploaded her video to Facebook, it has been viewed more than 100,000 times, and shared more than 1,000 times as of Tuesday afternoon.

Diller said James Spann, a well-known meteorologist who hosts an Alabama weather blog, asked if he could use her video on his website.

“I didn’t know him until (Monday),” Diller said. “I was also contacted by two tornado chasing companies, and they asked if they could share it on their pages.”

While it’s been a crazy couple days for Diller, she said it’s been worth it because of what her son said.

“We are so proud of our son,” she said. “We’ve always taught him to pray whenever he is scared. We are just proud that prayer was the first thing that came to his mind.”