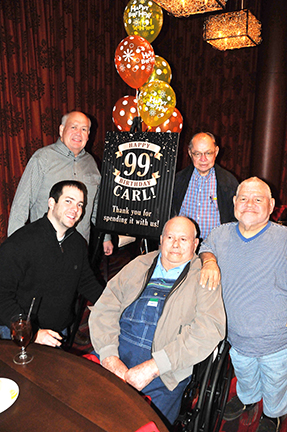 Carl McGhee Sr. is shown here with many of his family and friends. | Andrew Garner/Atmore Advance

Carl McGhee Sr. was born on Feb. 9, 1917 in Huxford, and celebrated his birthday at Fire Steakhouse at Wind Creek Casino in Atmore last Tuesday.

Larry McGhee, one of Carl Sr.’s seven children, said in the last few years, his father celebrates his birthday at the casino eatery.

“He drove until last year,” Larry said. “The state took his driver’s license.”

Because of gall bladder surgery, Carl is living in the Lavan Martin Assisted Living Facility in Poarch.

“We found out we couldn’t take care of him at home, and if it wasn’t for the tribe, we wouldn’t know what to do,” Larry said.

Much of Carl’s family works at the casino, Larry said.

“I worked at the bingo hall for about three years,” he said. “Gilbert works here.”

As a young man, Carl was drafted in World War II and went through basic training with the Marine Corps. He was trained to be a sharp shooter.

Carl didn’t see any action in the war as he didn’t serve very long due to the fact that he had already had three children by then.

One of the biggest changes that Carl said he’s seen is the change in car technology.

“His dad had an old Model T,” Larry said.

Larry said his father worked in the shipyard in Walnut Hill, and at the paper mill as a shipping clerk.