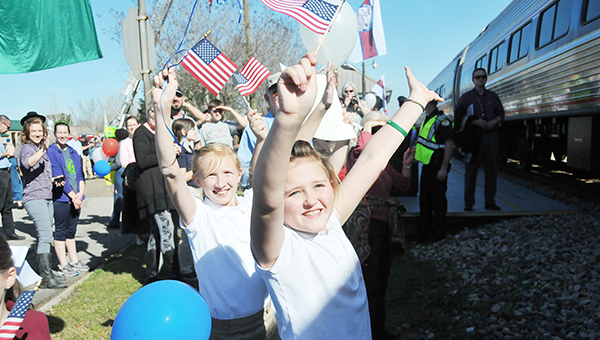 That’s how Mayor Jim Staff described the day when an Amtrak Inspection Train made a stop in Atmore last Thurs., Feb. 18.

Staff, along with other Mississippi, Louisiana and Florida dignitaries and Amtrak officials, rode the train from New Orleans, La., to Atmore, as it made stops in Bay St. Louis, Miss., Gulfport, Miss., Biloxi, Miss., Pascagoula, Miss. and Mobile before coming to Atmore.

“Atmore had the best turnout,” Staff said. “There was nothing like ours. We outshined them all. Our crowd was bigger than everybody else’s.”

On Friday, the train started the inspection tour again, making stops from Pensacola, Fla. to its final destination in Jacksonville.

The purpose of the inspection train trip, which was hosted by Amtrak and the Southern Rail Commission, was to examine the existing CSX railroad infrastructure, and to better understand the rail’s economic, cultural and mobility opportunities, according to the SRC.

Greg White, the chairman of the SRC, said the trip went great, and added that returning the service is feasible.

“This is Americana,” White said, shortly after disembarking. “We’re excited about the possibility of returning the rails back to Atmore. This is a good step in that direction.”

Right after Hurricane Katrina, the Amtrak train service ceased along the Gulf Coast.

In the middle of 2015, the SRC commissioned Amtrak to evaluate potential service restoration along the route.

As a result, Amtrak produced five alternatives. The SRC chose Alternative A, which would operate a daily, state-supported train round trip between New Orleans and Mobile, and extend the City of New Orleans train route from New Orleans to Orlando, Fla., daily. The proposed service would be an extension of the Chicago, Ill., service.

Alternative A would generate an annual ridership of 153,900 passengers and would require an annual operating funding commitment of $9.49 million, according to Amtrak’s survey.

White said option A would be feasible because the four states the service runs through — Louisiana, Mississippi, Alabama and Florida — would split the cost of having Amtrak return each year.

“That would cut it to less than $2.5 million a year, if we do the daily and round trip service from New Orleans to Mobile,” he said.

At a press conference after the train event, Amtrak Vice President Joe McHugh said Amtrak is working as fast as it can to get the service to return to the Gulf Coast.

“We have some ways to go, and we think we have a road map to go there,” McHugh said. “We’re hoping to get there faster.”

Rep. Corrine Brown of Jacksonville, who has been working to get the train service to return since Katrina, said Atmore did a good job of showing that it wanted the service back.

“Y’all did it up here,” Brown said with a smile. “Y’all look good. We want this train back.”